Things That Came: It Might Be Science, But It Sure Ain't Fiction

'Videodrome' and 'They Live,' then and now

Tweet
print
write a letter
Soylent Green is not, we repeat, not made out of people. But you can bet your genetically modified edamame that agribiz giants like Monsanto are hedging their bets, if not overtly breeding the stock ingredient of the late Charlton Heston's snacky fave. In the face of what appears to be an imminent, real-world famine of historic proportions, the food of the future may be tastier than we'd currently care to admit. People who eat people? They are the hungriest people in the world, to paraphrase Babs.

Welcome to the future as predicted by the cinema of sci-fi. What we used to call science fiction, way back in the good old days of Red Scare daze of Manchurian candidate psychenauts and Ray Harryhausen's stop-motion obliteration of Washington D.C., via flying saucer, is mutating rapidly into everyday "fact," and, woe unto us, most of it is darker and more ominous than an Imperial Stormtrooper's eyes. A quick scan of the news of the day reveals that not only have our favorite sci-fi films predicted things to come with uncanny and often disconcerting accuracy but that even the most paranoid dystopian once-upon-a-fictions (insert Philip K. Dick shout-out here) are, if anything, less startling than the banal world outside your front door.

Nostradamus had nothing on George Orwell, who, presumably, is whirling in his grave even as we speak. By way of example, take this snippet from Orwell's too-close-for-comfort classic 1984:

"When war becomes literally continuous, it also ceases to be dangerous. When war is continuous there is no such thing as military necessity. Technical progress can cease and the most palpable facts can be denied or disregarded."

Sound familiar? We are all Winston Smith now. "V" may stand for "vendetta," but thus far there's no prole backlash on the horizon that we can discern. Just cages full of rats and endless enemy combatants, hooded, helpless, horrific. And you thought you were taking the kids to Tomorrowland in a flying car? Not today, George Jetson.

By the early Eighties, Canadian filmmaker David Cronenberg was already known for blowing minds, thanks to his explosively popular previous film, Scanners, but in 1983, Videodrome entered a box-office season crowded with The Big Chill, The Right Stuff, Return of the Jedi, and, for good measure, A Christmas Story. It was the age of Ronald Reagan, Margaret Thatcher, and the Atari 800; cable television had already coiled around the family TV, but it hadn't yet put the squeeze on the Big Three, and MTV was still a relatively new phenomenon. In morning in America, the status was quo, and Hollywood reflected that placebo state with un-self-conscious ease. Enter Videodrome, which, like half a cockroach in a Denny's omelet, was a ghastly surprise. James Woods, at his amped-up, sleazeball best, is Max Renn, the owner of a Toronto public-television station whose search for "harder" programming fare leads him to uncover a sinister plot involving cancer-inducing television broadcasts, torture porn, and Debbie Harry's erogenous zones. Watching Videodrome today is, if anything, even more of a trip than it was during its initial theatrical release. Relentlessly dismal, morally ambiguous, but undeniably powerful in a way few genre films have ever managed, Videodrome foretells – and, more importantly, forewarns – of a future in which reality and television have become inextricably entangled. Indeed, the very idea of "reality television" is first expanded upon in Videodrome, which also presages everything from e-mail to satellite TV to corporate malfeasance on a molecular level. Cronenberg's vision of the future posits homeless shelters where those without access to television can get their cathode fix for free – shades of today's Internet cafes and omnipresent Wi-Fi – and climaxes with a one-man revolution, a gunshot, and a lonely prayer/curse: "Long live the new flesh!" It's like nothing you've ever seen, until you woke up this morning.

Five years after Videodrome, They Live roared to life. Best known to fans of South Park as the inspiration for the notoriously long "cripple fight" episode, John Carpenter's aliens-are-among-us-and-they're-wealthy-and-white-and-not-just-corporate-but-corporeal-too is like watching Fox News with your blinders off. Former pro wrestler "Rowdy" Roddy Piper is perfectly cast as an everyday Joe who, through sheer random accident, discovers that the world is, indeed, being run by evil aliens from another dimension. Transmitting a mind-clouding signal from high atop their local television station, the veal-faced schemers implant command and control phrases ("trust," "obey," "consume," "reproduce") that combine Josef Goebbels wit with the Bush administration's wisdom. Shot on a meager budget and minus Carpenter regular Kurt Russell, They Live succinctly illustrates the politics of fear as control, and social apathy and contentment as the easiest way to get the masses to follow the Judas goat into the slaughterhouse. Creepy? Like Bill O'Reilly, only more so. 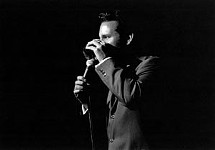