It's All Fun and Games Until Somebody Starts World War III 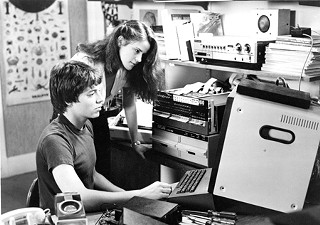 If you had the inclination, or the nascent technology, in 1983, you might have hit pause on a lumbering VCR to read the fine print as it blinked across the screen: "The Sudan Surprise" and "The Middle East Heavy" – a mulitculti roundup of WWF stars, early Eighties edition? And just what kind of over-the-counter cream will it take to uncatch "The Cuban Provocation" and "The Hong Kong Variation"? Or how about "The English Thrust"? Sure, it's got a beat, but can you dance to it?

These are but a few of the names of the Armageddon offensives faux-launched by a trigger-happy supercomputer in WarGames, the 1983 blockbuster that chilled to the bone anyone who had newly installed an Apple IIe in the family room. The supercomputer's military name, by the way, is WOPR, or War Operation Plan Response, and bless such Eighties stalwarts as Dabney Coleman and Barry Corbin for being able to say with straight faces a name that sounds like Burger King's marquee menu item. Toss in the giggling relics of dot matrix printers and floppy discs, and you'd think WarGames had aged itself out of relevance.

You'd be wrong. Though the WOPR (or Joshua, as it's more affectionately known) belonged to a whole decade consumed with man-made robotics with a mind of their own (see also: Space Camp's Jinx, D.A.R.Y.L.'s tragic boy-bot, and Short Circuit's Number 5), if anything, worry over the rise of our machines has only increased. Still, contemporary cultural relevance shouldn't be the only reason to celebrate the 25th anniversary of WarGames (also making the shortlist: a surprisingly sharp script and the singular joy of watching baby-faced Matthew Broderick try to save the world and get to second base with Ally Sheedy during one heady countdown to nuclear annihilation).

You could celebrate the anniversary from the comfort of your own home – the film's getting a new DVD release with a whole host of extras – but wouldn't it be more fun to do so in a one-night-only movie screening surrounded by other Cold War junkies? National CineMedia's Digital Content Network (which previously has piped live comedy shows and Metropolitan Opera matinees into your neighborhood multiplex) will digitally deliver WarGames into AMC, Cinemark, and Regal theatres nationwide on Thursday, July 24. In addition to the feature, new interviews with cast and crew will be screened. Also on tap is a sneak peek at straight-to-DVD sequel WarGames: The Dead Code, which might cause you to wonder if nothing is sacred ... but then, the makers of the new Red Dawn reboot have already answered that one for us.