The Chronicle's critics turn on each other for an online debate

Surely one of the great pleasures of moviegoing is the spirited interchange of ideas that happens when you exit the theatre: the postmortem, the bouncing-off of somebody else. Even better? When the bouncing-off becomes a brawl.

In that spirit –let's be honest, oforneriness –my film critic compatriot Josh Rosenblatt proposed awhile back the idea of an online debate. A forum for us to go head-to-head on our favorite films and an opportunity for our readers to get to know us better (because you can and should judge a critic by his desert-island list).

Next week we go live with our first-ever Film Fight – a five-day debate housed on our Picture in Picture blog. Josh and I will parry and thrust from July 7 to 11, and you're invited to chime in, too, with your comments or your chidings(you know, whichever). You'll also be able to vote throughout the week on who you think won the day, every day. Added incentive: Commenters will be eligible for prizes like movie passes and swag.

After the voting closes, the Chronicle will host a happy hour on July 17 at the United States Art Authority, at which the biggest vote-getter gets to program a night of thematically related motion pictures, and you get to tell us what you really think about us. Fair warning: Since the booze will be flowing, don't be surprised if we bite back. We're a contentious lot, we film critics, and not exactly schooled in social etiquette, either.

For our first Film Fight, we thought we'd play off of our summer of superheroes. I'm a fan of comic-book movies, and I'll be fighting the good fight for our friends in tights. Rosenblatt – ever the naysayer –will be making his case against them.

So join us July 7-11 at austinchronicle.com/filmfight for what will, no doubt, start out all civilized-like and devolve faster than a speeding bullet into a brawl. Did I mention I was junior-varsity state champ in Lincoln-Douglas Debate? Take that, Rosenblatt. Triumph of the Underdog
Film Fight III: Writers in the Movies 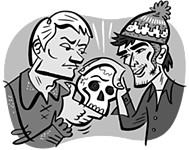 Once More Unto the Breach
Film Fight returns, dons ruff and British accent