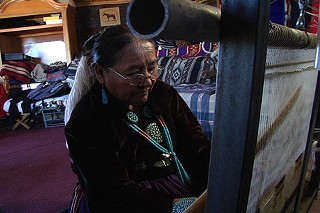 Many of the totemic Native American crafts of the Southwest are so familiar as to be almost clichéd, ubiquitously hawked as they are, from the counters of the cheesiest gas-and-Slurpee pit stops to the promotional brochures of state tourism agencies. Filmmaker and University of Texas graduate Bennie Klain, a member of the Navajo Nation and a former Navajo radio newscaster, decided to have a look at the current state of the age-old craft of Navajo rug weaving, examples of which, depending upon quality, can be found everywhere from museum collections and Sotheby's auction catalogs to the racks of trading stores found all over states like Arizona and New Mexico. Klain's subtle and beautifully shot (by UT's Nancy Schiesari) portrait of the co-dependent relationship between a group of Navajo weavers and its longtime Anglo trader – the guy who buys their rugs cheaply, marks them up substantially, and pockets a tidy profit at his trading store – is really the story of the uneasy, always tenuous interface of the artist with the marketplace and the exploitation that frequently accompanies a lopsided balance of power. This one is particularly poignant because the Navajo weavers are so impoverished, their livelihood so vulnerable to the vagaries of forces they can't control (including nature and the incursions of big business), and their traditional way of life so, well, of another time.

The Navajo women in Klain's Weaving Worlds practice their labor-intensive craft by first raising the sheep to produce the wool, then dyeing the wool shorn from the sheep, using dyes they've made from plants they've harvested. Historically, the design or pattern in a rug has had a spiritual significance to the weaver. We see how some weavers have responded to marketplace pressures – and that of the reservation trading-shop owner – to use synthetic yarns or to exploit designs that sell, despite their sacred spiritual significance. In the film, some of the young women from the reservation have left to seek higher education. One returns to the reservation to weave in her family's tradition. With fresh eyes, she sees the disconnect between her family's livelihood and the economics of the marketplace and believes that the Navajo infrastructure needs to get involved so that these weavers can receive a fair price for their rugs.

Austin Chronicle:Why did you choose to focus on the Navajos?

Bennie Klain: It was a combination of my being Navajo and being approached by a rug historian who had done the bulk of her research on Navajo rug weavers. Yes, Navajos are famous for rugs, but at the time, if anyone had approached me about doing a documentary about anything, I would have jumped at the chance. I had discovered filmmaking and was hungry to do more. I also had somewhat of a personal connection to the subject matter, as both my grandmothers were weavers who vigorously maintained the year-round lifestyle of raising sheep and shearing to wash, card, spin, and dye the wool to weave their rugs. I would even go with them to the trading post, so they could buy household goods with their finished creations. I remember witnessing this process but always took it for granted. ... [The film] was a process of rediscovery for me, and I was taken aback when I learned just how underpaid they were for the long hours of labor they put into each rug. Then, the project became a mission for me to tell their stories to the rug collectors around the world, who lovingly hang the rugs in their living rooms without knowing the gritty, practical, and personal stories behind them.

AC: What were some of the biggest challenges you faced in making this film?

BK: The biggest challenge at the outset was probably getting the weavers to trust me. The level of historical exploitation on reservations is immense. ... All the weavers were very guarded in our initial research and development trip. I was traveling with my producer, Leighton C. Peterson, as well as Kathy M'Closkey, who was our research director. Navajo society is very matriarchal, in that the women own all the property and the husbands are merely boarders who help out around the house, so I knew I would be dealing with some strong personalities. With this in mind, we decided to include two other individuals in our initial research trip: Jennifer Denetdale, a Navajo historian, and Roseann Willink, a Navajo linguist, both from the University of New Mexico.

So the five of us piled into an SUV and drove across the Navajo Nation, which is roughly the size of West Virginia, and we visited several different communities of weavers. The initial meetings were the most intimidating for me. While I did have a team traveling with me, in the end it was completely up to me to impart my vision for the film to the weavers we talked with along the way and to let them know we were not there to repeat the patterns of the past, which most of them were all too familiar with. Fortunately, my years working as a Navajo language news anchor had given me the fluency to talk in public arena situations, and that really came in handy in these initial meetings.

AC: Did you come away with what you'd expected going into the project?

BK: I told all the weavers we met with during research and development that I was approaching this as a learning experience. I expected to learn the exact inequities of the Navajo rug marketplace in both the historical and contemporary settings, and this was my focus when we began writing treatments during the grant-writing process. What I didn't expect to discover was how savvy the weavers are in terms of dealing with the marketplace.

One of the weavers, Zonnie Gilmore from Chinle, doesn't weave with hand-processed wool. She weaves with store-bought synthetic wool, since her buyers prefer a tighter weave. She also comments in the documentary that she weaves traditional Navajo sandpainting designs into her rugs, a practice that is frowned upon by other Navajos, who consider sandpaintings sacred and not something to be shared with outsiders. Zonnie simply states those designs make more money. She adds that the designs are meant for healing, so why should she be prevented from using them? For her, the weaving process is a healing process, and why should she be prevented from using them to make some money? That's extremely savvy.

AC: Do you think that things will change for the Navajos and their relationship to the market?

BK: Hopefully so. There are several Navajo weaving co-ops spread across the Navajo Nation, but there is limited communication between them due to the lack of infrastructure. We hope this film can act as a tool to get weavers connected and talking about their own relationships to the marketplace, to help them identify ways of forging direct relationships with buyers rather than going through a middleman, which is the way it's been done for decades.

I also think with the advent of the Internet, things will definitely change. The Web is such a recent phenomenon in the Navajo Nation. Most of the weavers we spoke with don't have electricity, but there are others who do, and they sell their rugs over the Internet. That speaks to the diversity within the Navajo rug-weaving community.

AC: What is it that you would like the audience to take away from your film?

BK: The Navajo community and other Native communities are alive and well, and we will always be here in all our wonderful vibrancy. But we are doing it now on our own terms.

The AFS Documentary Tour presents Weaving Worlds on Wednesday, July 9, 7pm, at the Alamo Drafthouse at the Ritz. Tickets are $4 for AFS members and $6 for the general public. For more information, visit www.austinfilm.org.