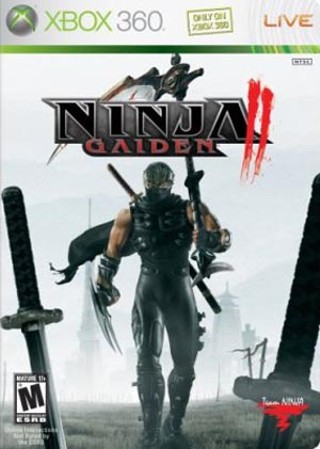 
Ninja Gaiden II is designed by the hardcore gamer for the hardcore gamer. If you're anything less, it can still be a gratifying experience to slip behind Ryu Hayabusa's ninja veil and slide gracefully along walls, brandishing one of your dozen or so weapons. It's just also an incredibly punishing, fairly stressful affair.

The story is near nonexistent: Your clan must protect a statue that, if shattered, will allow demonic fiends to take over the world; your rival clan breaks the statue. But the story's not the point. The point is adrenaline, and I'm gritting my teeth just thinking about the visceral rush. Ryu's combat options are more varied than before. A wider variety of weapons and an improved set of moves and damage options let you occasionally pick an enemy apart, limb by limb, before pulling off a barrage of finishing blows. When it happens, it's powerfully satisfying.

Unfortunately for the more casual gamer, it's tough to pull off. You're confronted with swarms of ninjas, demons, and something that I'm not quite sure about but looks like a robotic worm. With a steep learning curve, it's tough to find time to breathe, let alone learn combos.

Even for the hardcore, though, the gameplay is still held back by an awkward camera that consistently winds up facing away from the horde of demons about to slice Ryu into ninja tatters. There's also a hefty dose of repetition.

Although the limited story packs in as many environments as possible, they amount to little more than different-colored paint on the backdrops surrounding a big (and occasionally little) square for you to fight in. There may be a giant dragon statue in the Japanese temple, but behind the invisible wall that's your actual boundary, that statue might as well be in New York.

The limitations don't stop the game from being fun – if you possess enough skill or perseverance – but since ninja combat is clearly the only thing that matters in the game, it would have been nice to see it done right.