Whip It? More like a 'Blew It': Drew Barrymore pic finds better incentives in Michigan

'Whip It' snaps up wolverine cash

The Drew Barrymore-directed Whip It soon would be filming entirely in Austin, if Texas offered 15% incentives instead of its current 5%. That's the word from Bob Hudgins, head of the Texas Film Commission, who has been courting the Austin-set film written by Shauna Cross, who grew up in Austin, and dealing with the Roller Derby revival that began in Austin. Instead, it's going to Michigan, where Barrymore was spotted last week scouting locations in Ypsilanti and where they'll offer up a whopping 42% financial incentive for the film said to have a budget in the $15 million range. "Drew really, really wanted to do it here, but financially there's such a difference to what they're getting in Michigan," Hudgins says. How could a 15% incentive (a figure Texas film insiders are hoping to convince the Legislature is viable) potentially beat out 42%? Barrymore's film will have to import a Los Angeles crew to Michigan. The Texas plan was to bring in only three people from Los Angeles, Hudgins says, with the rest of the hires entirely local. Most states offering incentives hook them to the hiring of local crew, but Michigan is using its gaudy incentives to start a film industry from nothing, so they'll offer payments, as Hudgins puts it, for anyone who breathes.

As we told you in January, the University of Texas Film Institute is now in the driver's seat as the for-profit Burnt Orange Productions stalled out. Look for Dance With the One to go into preproduction in June, with a July 7 start to filming of UTFI Feature Film Lab's first all-student production. Written by Joshua Smith Henderson, a student at UT's Michener Center for Writers, and Jon Marc Smith, the story is described as "an Austin-based neo-noir thriller in the vein of the Coen brothers' Blood Simple" (which coincidentally also shot in Austin). The biggest differences between UTFI's production and the previous ones from Burnt Orange are the greater level of student involvement and the lack of pressure to satisfy outside investors. "We can afford to take risks and tell raw stories," UTFI Creative Director Alex Smith told me previously. "It's okay if it doesn't sell, as long as it tells a good story." The film will be directed by Michener Center grad Mike Dolan. Students will have a mentor in each production department, including producer Elizabeth Avellán (Desperado, Once Upon a Time in Mexico), casting director Beth Sepko (Office Space, Miss Congeniality), and actress Dana Wheeler-Nicholson (Fletch, Friday Night Lights). The crew will include 40-50 graduate and undergraduate students who will earn course credit. Postproduction continues in the fall and will be supervised by Keefe Boerner, formerly of Troublemaker Studios, and John Pierson will lead a marketing and distribution focus in the spring.

Austin screenwriter Mike Murphy's script for horror film Javelina is now filming in Rocksprings with Barry Tubb directing. Tubb is also producing with Suzanne Weinert, who is behind Ex-Terminators, which is shooting in Austin. The cast includes Tubb and Sonny Carl Davis... Rowdy Stovall's Mexican Sunrise sold at Cannes to Italy, Germany, India, and elsewhere. Now he's closing the deal with producers for an Austin shoot of Ex-Games. More details as we get them... Emmy Award-winner David Lago (The Young and the Restless) is the lead in Mariusz Kotowski's Deeper and Deeper, which begins shooting here this week... Austin-shot Kabluey, which won an audience award at the Austin Film Festival, has been picked up for distribution by Regent Releasing. Look for it later this summer... Mike Rembis of Austin won the Cannes 24-Hour Film Challenge with his short "Perfect Pitch." You can catch it at www.cannes24filmchallenge.com. 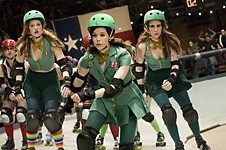 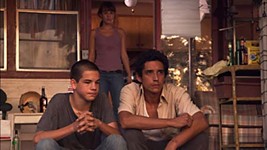 Hot Summer, High Stakes
A pot dealer comes of age in 'Dance With the One'