The SAMOPC hosts a night of music and a movie

Tweet
print
write a letter
Whether there's a North Austin Museum of Popular Culture in the works, or a Central Museum maybe, is unclear, but the South Austin Museum of Popular Culture (1516 S. Lamar Ste. B) welcomes visitors from all parts of the city and beyond. Situated at the epicenter of 78704 hipsterdom, there's no mandatory display of tattoos upon entering and no obvious discrimination against those of less august ZIP codes. Still, it's an odd museum, to say the least. The hours are quirky (Thursday–Sunday, 1-6pm), and the building itself is slightly set back from the street, so that it practically demands that you accelerate past it. Inside, the walls are largely devoted to the far-out imaginings of local concert poster artists, many from the Sixties and Seventies. Inspirational musicians represented include deities such as Springsteen and Talking Heads, with a wide range of cult figures and backyard heroes also well represented.

The museum plays host this Saturday, June 6, to a night of music and a movie, sunshine and gloom. The sunshine (and music) comes in the form of Vinyl Dharma, a local Austin band whose electronic music leanings carry a post-Ecstatic pop glow, as reflected by their catchy signature tune "The Sunshine Rave."

The movie – and the gloom – come in the form of Control, Anton Corbijn's acclaimed biopic of Ian Curtis, lead singer of Joy Division before committing suicide at the age of 23. Control may be a perfect match of subject and director. Corbijn's body of work as a rock music photographer is broad and deep, and includes images of Joy Division taken throughout the band's all-too-brief career. The film is shot in black and white, which besides being a natural predilection of Corbijn, may also have been the only way to record the endless gray of Manchester in the late Seventies. Either way, if you're looking for an antidote to spring heat and blue skies, this may be it.

Events begin at 7:09pm on Saturday, June 7, with Vinyl Dharma playing at 8:30pm, and Control following at 9:30pm. For further information, visit the museum website at www.samopc.com or call 440-8318. 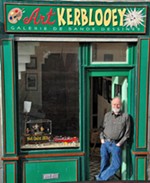