Tragedy on the Border 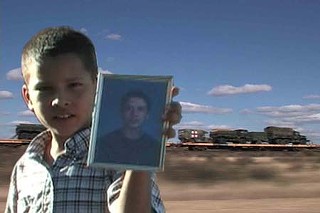 The Ballad of Esequiel Hernandez

You may detect something familiar about Kieran Fitzgerald's doc, The Ballad of Esequiel Hernandez, and Tommy Lee Jones' directorial debut, The Three Burials of Melquiades Estrada – besides Jones' presence in both (he narrates the doc) and the setting on the Mexican border. In fact, Three Burials (written by Guillermo Arriaga) was a fictionalized account of several border incidents, including the one that Fitzgerald chose to make a nonfiction film about: the 1997 tragic fatal shooting of Esequiel Hernandez, an 18-year-old Mexican-American, by a Marine, who was there to patrol the Texas-Rio Grande border as part of the War on Drugs. Hernandez, who was out walking his goats (with a .22-caliber rifle in hand), was mistaken for a drug smuggler by the patrol of four camouflaged and M-16-toting Marines.

The shooting took place in Redford, Texas (population 100), in Presidio County. According to the film, this sleepy farming hamlet was (ironically and erroneously) believed to be rife with drug-traffickers. The sequence of events leading to the shooting is reconstructed for us through interviews with the three now-former Marines, who were deployed with the shooter, Clemente Banuelos (who does not appear in the film), along with the actual video and audio recordings of radio communications that took place between the four Marines and their commanders as they struggled to identify who Hernandez was and the nature of the "threat" he might pose, given that he had fired his rifle twice in the Marines' direction. (In hindsight, his shots appeared aimed at other animals and not at the well-camouflaged – as bushes – Marines, whom Hernandez was unlikely to have been aware of.) Ultimately, Banuelos tracked the boy until he had a clear shot and then, though the Marine would later claim self-defense, shot him in the back from 200 yards.

Although the shooting occurred during the Clinton administration, the policy of beefing-up the War on Drugs by bringing in the Marines was initiated in the late Eighties on Bush Sr.'s watch. After the Hernandez shooting, the Marines were removed. The state of Texas attempted to bring murder charges against Banuelos, but in the highly polarized atmosphere, the grand jury failed to return an indictment. Inexplicably, the Justice Department subsequently dropped its investigation as well.

This film is Fitzgerald's first feature; his father was a producer on Three Burials, and Fitzgerald worked on that film in 2004. At that time, he felt that in light of the current administration's use of the National Guard on the border (albeit, unarmed), now both for purposes of the war on terror and to enforce immigration policy, examining the Hernandez shooting could serve as a cautionary tale about the perils of having the military on the border.

Austin Chronicle: What is the point that you'd like the viewer to take away from your film?

Kieran Fitzgerald: That generally speaking, it's a bad idea to use soldiers who are trained to kill [inside] the U.S. [border]. We should expect them to conduct themselves according to their training, and that training is for war and not for peacetime missions, and certainly not for dealing with the American civilian population. ... To me, this was an incredibly important precedent to be aware of, as a voting citizen in this country. We just went through a big mistake in our border policing in the Eighties and Nineties that resulted ultimately in the death of this innocent person, and that shouldn't be allowed to happen again.

AC: So your point is that the problem is the militarization of the border – if we didn't have the military down there, armed, this would not have happened?

KF: Oh, yeah, no doubt this would not have happened if we hadn't had armed Marines sitting on the border ...

AC: So, to play devil's advocate, you don't think that this is the sort of thing that often happens when people – no matter what uniform they're wearing – have guns? That there will be gross human error and egregious bad judgment, and someone will get killed?

KF: Yes, definitely, but I think there's a difference between an unfortunate accident with cops who are at least presumed to deal with civilians and a government deciding to use military who are not trained to deal with civilians but trained to go to war – in our own country. On our own soil, this feels counterintuitive. Nobody in the Pentagon ever supported the idea – it was pushed through by politicians.

AFS Documentary Tour will present The Ballad of Esequiel Hernandez on June 11 in a special members-only screening. The film premieres on PBS' POV on July 1.