Guess Who's Coming to Terrorize Your Night 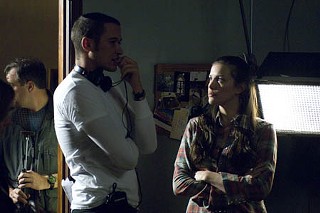 Real horror, anyway, as opposed to reel horror (the latter of which is all-too-often as random as, well, death and taxes). Those genre films that do creepy-crawl inside your psyche – via the artistic trickery of light and shadow and a well-penned script that avoids pitching the most probable sorts of cinematic curveballs – blow the same primal anxiety-fuses that raised goose-skinned alarms when you were 12 ... and there was a knock at the door ... in the middle of the night ... and your parents were away.

Wes Craven did it with Last House on the Left, and Tobe Hooper did it with The Texas Chain Saw Massacre, but Terrence Malick did it, too, with Kit and Holly and the great wide open. And John Cassavetes, who knew the Shadows both within and without as much as Val Lewton ever did. But most "horror" films go for the easy out these days: Somebody, somewhere tortured a metaphorical duckling, and now someone else has to pay with their blood. Real horror defies such easy backstories. There's just knuckle-meets-wood, and then all hell breaks loose. It happens every second. Somewhere.

University of Texas alum Bryan Bertino's debut feature, The Strangers, with Liv Tyler and Scott Speedman as a pair of damaged lovers victimized by a trio of masked midnight assailants, is remarkable not only for its matchless suspense and the palpable unease it inspires but also for its wrenchingly honest (and riveting) subtext: Bad things will happen to everyone, and no one – least of all you – gets out alive.

Austin Chronicle: The Strangers opens on a note that says, essentially, this film is based on actual events. What exactly was your inspiration, or what were those events?

Bryan Bertino: When I was a little kid, I lived in a little town near Fort Worth called Mingus, and when I was 12 years old, my dad gave me a book to read called Helter Skelter. I don't know what my dad was thinking, but the book really grabbed me, and I ended up reading it. I've always been fascinated by the Tate killings, the strangeness of that night, the idea that they were just there, in this house, and at least from their point of view – the victim's point of view – they had no idea. Obviously, Manson had been to that house in other circumstances, but for them, for the victims, it was just another 12 o'clock at night, and some people wandered in. That was something that caught in my mind, and so when I decided I wanted to write a genre film, I started thinking about victims, thinking about obituaries, and thinking about all those stories you hear over the years about someone who's been killed and what it must have been like for them, the randomness of it.

We end up reading the newspapers 50 times, and we have a much more complete picture of events: We find out that, oh, that terrible guy was abused by his grandmother or whatever. But the victims had no way to know that.

AC: Was The Strangers based on a specific incident?

BB: Well, the other thing that got me going was that when I was that little kid, I lived on a house, on a road, in the middle of nowhere, and one night when my parents were gone and it was just me and my little sister, somebody started knocking on our doors. As it turned out, it was burglars, and any house where no one answered the door, they'd break in and steal everything. But we didn't know that at the time, and my 9-year-old sister opened the door. And these people asked for some made-up person and then moved on. We didn't find out what was really going on until the next morning when the cops were down the street. And I used that, you know, I began thinking about that level of randomness and the idea of someone knocking on your door in the middle of the night and not hoping that nobody would be there but, instead, hoping that somebody would. That's where The Strangers came from.

BB: Not in a long time. I haven't seen his new version.

AC: You went through UT's film department and then moved out to Los Angeles, right?

BB: Right, I studied cinematography. The way the film school at [UT] works is that if you don't have any money, you don't get to direct. I learned pretty early on that you could tell stories by being cameraman as well. All through college, I never wrote; I never did anything like that. The group of friends I was with, we were very interested in a specific kind of film, slice-of-life, kind of Raymond Carver-esque stuff that didn't really go very far because it was just these kind of beats. We were really interested in intense drama, though, so when I got out to L.A., around 2002, I started writing, because I realized I didn't want to be a cinematographer. I was working as a [production assistant], but what I really wanted to do was tell stories. I didn't have any films, just a pretty rough reel, and I'd never actually directed at all. So I made the decision to write scripts. And I kind of just figured out how to do the three-act structure and then learned to love that. And The Strangers was my third attempt.

AC: Were you always a fan of the horror/suspense genre?

BB: I was, yeah. But also I was really into a lot of Seventies genre films at the time, going through Scorsese and Malick, and I found that the Seventies were a great period for genre filmmaking, in that you still had directors running the town, and they were still telling these very dramatic stories, but they were using genre to do that. Three Days of the Condor has these amazing moments with Faye Dunaway and Robert Redford, and it got me thinking: What if I did a genre film but approached it in a way that really cared about the characters and brought the drama of their situation up front? To me, it made perfect sense. I liked writing about sad people, I liked writing about darkness, so I thought: Why not mix the horror and the drama? Great drama has emotional emptiness and great horror films, I think, leave you empty.

AC: How did The Strangers ultimately make it from script to screen?

BB: In 2005 or late 2004, I started entering all my scripts into festival competitions, including the Austin Film Festival – where it didn't do anything – and the Nicholl Fellowship, where I got into the quarterfinals. That then got me on a list that went out to agents and managers. I was working on a low-budget film in Sacramento when a manager called me and said, "I love [The Strangers]; call me when you get back in town." That was right around the time The Grudge came out, and the manager told me that Vertigo [Entertainment] was interested in doing it, and I'd have to meet with them. It was my first meeting, actually, and four days later, they bought the script. I literally had to quit my job working on another low-budget film, which a buddy of mine from Texas had got me on. I ended up calling in sick three days in a row and quit on the same day I sold the script.

BB: The script ended up floating around for a while, and no one was really cracking it, no one knew how to do it, and by that point, I had worked for Scott Rudin and Jerry Bruckheimer, doing a script and some rewrites, and I'd "learned the game," so to speak.

Eventually I got a call from Andrew Rona at Rogue Pictures. He wanted to set up a meeting with the screenwriter – me – which went really well. Actually, right after I left Rogue's offices, [Rona] called my agent and asked if I wanted to direct The Strangers.

AC: You seem to be pretty much taking this leap from struggling writer to full-fledged director in stride, seeing as how you couldn't pitch this story past first base if it were a script.

BB: [Laughing] I was completely stunned. I had to go back [to Rogue] and pitch it for real. My girlfriend at the time and I were scrambling around trying to figure out how to ... "pitch it." I knew if I was going to direct, I wanted The Strangers to feel a very certain way. I didn't want a lot of CGI, Panic Room-style movement. I really wanted to feel the ground. I was influenced a lot by [Cassavetes'] A Woman Under the Influence, where you feel as though you're almost intruding on these characters. The key, to me, was putting the camera in the room with these two people and then, hopefully, the audience will feel exactly what Liv's character feels when she hears a creak in a lonely house. Because we've all heard that creak, you know?

The Strangers opens in theatres this Friday. See Film Listings for showtimes and review.