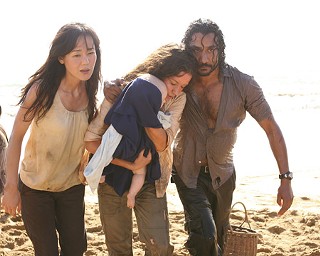 Yeah, not so much feeling it anymore

With the season finale of ABC's Lost this week, I imagine there will be viewing parties all over town, like the Alamo Drafthouse's sold-out screening. The fan sites are abuzz with anticipation, and most everywhere I look, it is hailed as the "must-see" season finale of the TV season. Every one of my friends watches Lost, and at parties the topic of conversation, it seems, is always six degrees of separation from Lost. I nod and smile politely. Oh yes, I've seen every episode; I know who the characters are. I sometimes even watch those recap episodes, with the pop-up supertitles that explain who's who, what's what, if we're fast-forwarding or flash-backing or referencing prior episodes, and even give fun bits of trivia. I've called myself a fan of the show. I gave it a glowing review when it premiered in 2004 and tuned in religiously every week. Sometimes I watched the episode I recorded twice. But now, I have a confession to make: I've lost my love for Lost.

Out of curiosity, I typed "I hate Lost" in my Web browser to see what would come up. I was mildly surprised to find others who also hated the show but was quickly discouraged when the postings were either superficial diatribes or complained about how much work watching the show was. I've never been a person to shy away from "difficult" TV fare; in fact, I like to think of myself as an advocate for challenging TV. And while I believe there are many intriguing elements of the show, many interesting characters and curious twists and turns, watching Lost feels like a booty call. I stupidly open the door (or in this case, turn on the TV) every time Lost calls. While the series makes lots of promises to show me a good time, after a while I can't help but think: Is this all there is?

One blogger captured my sentiments well at www.throbbinggoo.blogspot.com (a Canadian only identified as "Beast," whose occupation is "damned liar"). He described watching Lost as an unending game of tickle and tease, with promises of revealing what's in the magic "box," only to reveal that – guess what? There's another magic box inside that one. Sigh.

I was one of the viewers who said Lost had lost its rudder at the end of the third season. Unlike some viewers, I gave it another chance (its audiences have steadily declined since its premiere). But despite the constant drumbeat declaring Lost is back, I disagree. What the show excels at is luring viewers in and feeding them just enough to keep them coming back, driven by red herrings and smoke and mirrors.

To say I'm expecting a lot from the season finale is an understatement. I want to be convinced once and for all that it's worth my time to return for the remaining seasons that continue through 2010. Better yet, wrap it up this week, and I'll be forever grateful.

The season finale of Lost airs tonight (May 29) at 8pm on ABC. Full episodes may also be streamed free at www.abc.go.com.

Think you can outwit, outplay, and outlast fellow strangers in some remote part of the world while being watched by millions? If so, you may be right for Survivor, which is coming to Austin next week. This is only the second time the popular reality series has come to town looking for contestants. Applicants are invited to show up on Friday, June 13, from 1 to 5pm at the Backwoods in the Hill Country Galleria (12921 Hill Country Galleria Blvd.). Among the many criteria, potential contestants must be 18 years old or older and have a valid passport. The complete guidelines and a downloadable application are available at www.keyetv.com. Search for "Survivor casting call" to get the goods.