MonkeyWrench celebrates May of '68

If the pen is mightier than the sword, then what of a movie? Can it foment revolution, too? Certainly it can inspire a cease-and-desist – which is exactly what happened when local radical bookstore MonkeyWrench Books decided to celebrate the May of '68 French uprising with a screening of A Grin Without a Cat, the three-hour-long film essay from the iconic Chris Marker (La Jetée). The film's American distributors got wind of MonkeyWrench's plan for the free screening and threatened litigation, which led to some last-minute scrambling and an attempt to contact Marker personally for permission. In the end, the MonkeyWrench gang opted to stand down and show instead Can Dialectics Break Bricks?, a 1973 French mash-up of martial arts and political agitation. It's the first in a planned monthly series that will highlight the universality of the revolutionary spirit; other films include The Weather Underground and, in an October anniversary screening, Rojo Amanecer, Jorge Fons' film about the Tlatelolco Massacre of student demonstrators 10 days before the 1968 Mexico City Summer Olympics. 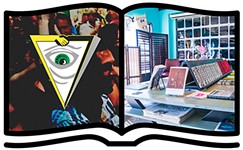 MonkeyWrench Books, A Grin Without a Cat, Can Dialectics Break Bricks?