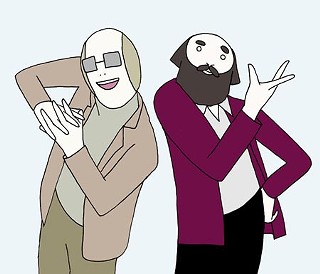 Brad Neely has had Warner Bros. on his back (for producing an alternate narration for the first Harry Potter movie called Wizard People, Dear Reader) and the viral masses at his feet (for his giddily nonsensical Founding Father rap, "Cox & Combes' Washington": "He had a pocketful of horses/fucked the shit out of bears"). So what's he gonna do next? Nope, it isn't world domination, but for an animator, it comes mighty close: He's going to premiere a short on Adult Swim, the Cartoon Network's inventive, tastemaking block of programming that's geared at grownups ... well, grownups who dig samurai and litigious superheroes, a talking milkshake and post-post-irony (po-po-rony?).

The Austin-based animator premieres his new miniseries, called China, IL, on Adult Swim on Sunday, May 25, at 10:45pm. Maybe "miniseries" sounds grandiose, but China, IL – in addition to reviving well-loved Neely creations the Professor Brothers and idiot savant Baby Cakes – manages to compact in 11 minutes love and death and oral-sex oratories, not to mention astonishingly silly lessons in revisionist history (to wit – calling out "ca-ca-faced" Helen Keller for "burgling turds"). Neely's sensibilities aren't for everyone, but his mingling of blowhard, simpleton, and non sequitur quite often toes poetry. If that sounds up your alley, then don't bother waiting for Sunday night – three of the four linked episodes are already streaming at humor site Super Deluxe. Owner TBS announced at the beginning of the month that it was folding Super Deluxe into sister site AdultSwim.com (in the process, laying off the Super Deluxe staff), but for now, the site is still up and running, with a sizable backlog of Neely shorts and another 25 videos yet to air. "Baby Cakes and the Professor Brothers are not over," Neely says, "and I have really just begun."

China, IL premieres on Adult Swim on Sunday, May 25, at 10:45pm. Episodes can also be streamed at www.superdeluxe.com.