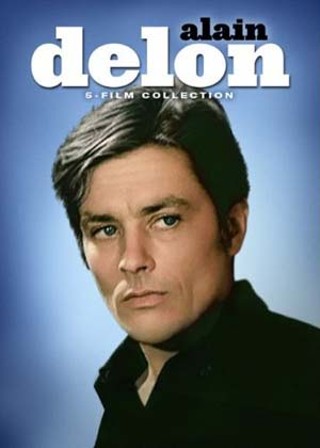 
Cinema Française cancans a chorus line of feminine pulchritude from Arletty to Vanessa Paradis, Jeanne Moreau to Brigitte Bardot, and still, former French marine and Sinatra-esque tough guy Alain Delon burned froid et chaud with the best of them. Catherine Deneuve's royal impassivity, upon which filmmakers and filmgoers project personification while agog with her radiance, found its male counterpart in Delon. Italians Visconti and Antonioni leveraged this sublime blank slate second only to the great Jean-Pierre Melville's Delon-shot crime troika: Le Samouraï (1967), Le Cercle Rouge (1970), and Deneuve-iced Un Flic (1972). Among those greatest hits, add at least one more from this five-film set on three DVDs. The Swimming Pool (1969) teams the then-midthirtysomething actor with an equally supple Romy Schneider as St. Tropez getaways dropped in on by her ex and his bored teenager (Jane Birkin). Delon, Schneider, and Birkin – all bronzed and cavorting by la piscine – devastate more than the film's tense mise-en-scène. Diabolically Yours (1967) capped the long career of writer-director Julien Duvivier (Pépé le Moko), who was killed in a car wreck following its release. In it, Austrian spellbinder Senta Berger – Sharon Tate meets Ann-Margret – brings her amnesiac pretty boy back to their country castle, which may or may not be powered by Gaslight. 1971 sleeper The Widow Couderc pairs up Delon's escaped murderer with French moviedom's first lady, Simone Signoret, between world wars and under the prying minds of poison relations. Terminally compromised Paul Meurisse (Army of Shadows) offsets the trashy machismo of Delon-produced The Gypsy (1975), hats, scarves, knives, and guns barely disguising the star's baggy languor. Pushing 50 a decade later in Our Story (1984), Delon's runny blues and apex brows hang in the balance of a typically twisted sex farce by Bertrand Blier, six years removed from his Best Foreign Language Film Oscar for Get Out Your Handkerchiefs. A cable absurdity spiked oddly existential, its messy premise ("The nympho and the drunk," pronounces Delon, "love at first sight on a train") plays out classical amour fou to Schubert and Beethoven like The Nutcracker for holiday suicides. Revealed only in conclusion, Our Story manages to expose Delon's true grace.

Blast of Silence (Criterion, $29.95): "Remembering, out of the black silence, you were born in pain." Lionel Stander's unbilled narration chisels this swift, Melvillean, hit man hit-and-run written, directed, and starring Allen Baron in 1961. "You were born with hate and anger built in. It took a slap on the backside to blast out the scream."

Mafioso (Criterion, $29.95): Pie-faced funnyman Alberto Sordi holds his own against beauties Marcello Mastroianni and Stefania Sandrelli in respective Criterion boot-hooting delicacies Divorce Italian Style and Seduced and Abandoned. You can never go home again if you're a vacationing Sicilian in need of a favor. Alain Delon, Our Story, The Widow Couderc, The Swimming Pool, Diabolically Yours, The Gypsy