Tweet
print
write a letter
It's spring-cleaning here at the "TV Eye" desk. Here are a few things recovered from the inbox.

The Radio-Television News Directors Associa-tion recently recognized local TV personalities for excellence. Local ABC affiliate KVUE-TV received "six regional Edward R. Murrow Awards for excellence in electronic journalism, more than any other local television station in Austin, and tied for the most in Texas," according to a recent press release. This was the fifth time KVUE received honors for overall excellence. Specific honorees include executive producer Carlos Reina for Best Newscast, Christine Haas and Todd Rogenthien for Investigative Reporting, Mike Barnes and Nate Cardenas for Sports Reporting, Robert McMurrey and Kevin Peters for Spot News Reporting, and Todd Rogenthien for Best Videography. The regional awards were given in April, and all winners are automatically entered into the national competition, to be awarded in June.

We recently talked about Big Ideas for a Small Planet in our Green Crush issue; the series continues on the Sundance Channel on Tuesdays at 8pm. Here's what you have to look forward to in May:

"Wear" (May 6): A look at how the apparel industry is creating fashion with a conscience, from using biodegradable textiles and dyes in the front end to swap-o-rama events, where people are not only exchanging their old favorites for new treasures but some designers are working exclusively with discarded clothing to create something entirely new and unique.

"Eat" (May 13): How do we eat, what do we put in our mouths, and just what is in that juicy burger? This episode looks at three entrepreneurs who care about how we eat while keeping in mind that most people still crave the convenience of fast food and urban living.

"Drive" (May 20): Alas, no love for mass transit, walking, or car-sharing. This episode looks at variations of the electric car, including cars converted from gas-guzzlers to clean driving plug-ins, as well as high-end sports cars.

"Furnish" (May 27): You will think twice before you leave that prefab furniture near the Dumpster. Three pairs of furniture designers are profiled, with a focus on how they take a green approach to their products, from materials to manufacturing to distribution. 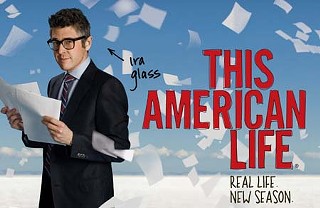 Get swept up by the second season of This American Life. It premieres Sunday on Showtime.

Practice your gritos. KLRU will air Compa-ñeras on Tuesday (see "TV Eye," March 28). Slated for an earlier airdate on Independent Lens, the documentary about the L.A.-based, all-female Mariachi Reyna got bumped to the wee hours of the morning due to the KLRU fund drive. Now you can watch it at its (almost) regular time slot on Monday, May 5, 10pm.

This American Life returns for a second season on Sunday. Alas, my request for a review screener went unanswered, but I can't imagine this series, inspired by the original radio show hosted by Ira Glass, won't have a second season as amazing as the first. I admit I was an early skeptic, defying anyone to convince me that the TV version would be as wonderful as the radio program. I was so very pleased to be proven wrong. If you haven't seen this series of "funny, surprising stories that happen to be true," the first season just came out on DVD. You can also watch the first season online at www.sho.com. No, it's not free, but it's worth every penny. This American Life airs Sundays at 9pm on Showtime.

Just in time for Cinco de Mayo: Comedy Central celebrates by serving up some belly laughs with some previously aired specials. Gabriel Iglesias: Hot & Fluffy starts off the night, followed by two helpings of George Lopez: America's Mexican (which originally aired on HBO). Another showing of Iglesias follows, with Alex Reymundo: Hick Spanic bringing your Cinco de Mayo evening to a close. Haven't seen Reymundo, but Iglesias' act is a scream, and Lopez is very, very funny (besides his act, Lopez can be seen starring as the mayor in Reno 911). The evening of laughs starts on Sunday at 7pm.

Speaking of laughs, get this description of an upcoming episode of Lil' Bush: "Lil' Vladimir Putin and Lil' George start a schoolyard rivalry, and it escalates to Lil' Putin poisoning Lil' George. After some training from former wrestling champ Barbara Bush, Lil' George faces off against Lil' Putin in a playground battle. Meanwhile, Lil' Cheney has been partnered with Lil' Nancy Pelosi and given a watermelon to care for as their child. When it becomes apparent that their watermelon is a lesbian, Lil' Cheney has some hard choices to make." Lil' Bush airs Thursdays at 9:30pm on Comedy Central.