Well, these videos don't just direct themselves, you know 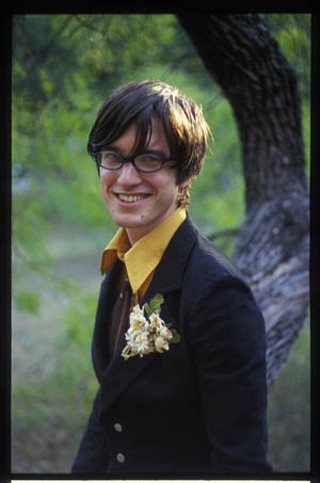 One of the first things you notice about Backpack Picnic shows is how well-made they are, how they translate the madcap sketches of Mitch Baker and friends from live performance into videos of solid impact. This isn't just another bunch of talented fools with a webcam; this is some professional industry going on. Long tracking shots, wide-angle outdoor scenes, diverse locations, note-perfect costumes, lighting that works. The man behind this excellence: René Pinnell.

"The reason the episodes look the way they do," demurs the native Austinite with the stylish glasses, "is because I work with some awesomely talented folks who let me abuse them terribly. George Morrow, who does our art direction and VFX [visual effects], is a robot workhorse that requires no sleep and only occasional watering. Everything in the frame – except the actors themselves and the clothes they wear – George is responsible for. We also have two very talented costume designers, Jessica Gilzow and Melisa McCawley, who work their asses off."

Yes, but the camerawork? The way a viewer experiences the viewing?

"Sure," says Pinnell, "you wouldn't be able to see any of this unless you had a camera and someone who knows how to turn it on and point it at stuff. We're lucky enough to have two people who are experts at that: PJ Raval and Mike Simpson. One month, PJ will shoot, and then, the next month, Mike will shoot. We also have a great crew – Scott Snyder on sound, a whole bunch of people lifting equipment and positioning, and – I'm a lucky man."

He's a humble man, this 24-year-old UT grad (2004, a bachelor's in Radio-Television-Film), maybe because he's not exactly a reservoir of experience. "I hadn't done all that much video before Backpack Picnic, really. Just a couple of music videos – one for the Handsome Charlies, one for my buddy Elliot Cole. I think the Handsome Charlies are still around, maybe they're still playing together, but I've since started to work with their lead guitarist on another project. You never know what's gonna lead to what."

But now there's a feature-length movie in his résumé, too.

"The King of Texas, yeah, that was a really fun project," says Pinnell of his documentary that world-premiered at this year's South by Southwest Film Festival. "My girlfriend, Claire Huie, and I spent the last two years working on it. It's about my uncle, Eagle Pennell – he spelled his last name differently – who was the first person to make a film in Texas and by Texans that wasn't a genre picture. The Texas Chain Saw Massacre came out before his film, and a real obscure film that nobody's ever heard of, The Tomato That Ate Cleveland, but those are the only others before Eagle's The Whole Shootin' Match in 1979. And a lot of people in the Eighties sort of pointed at him as the guy who proved that you can do it here; you can make a movie here.

"Before we did The King of Texas, I didn't know anything about him at all. And I found out that he was a really talented filmmaker; I like his first two films tremendously. And he was just an interesting character, too. He was a hopeless drunk with a gigantic ego, you know, but he really inspired the people that he worked with. He could draw things out of people that they didn't know they had."

So maybe that's the one trait that runs in the family, maybe that's what's brought the young director this far?

"Well, I currently live eight blocks from the house I was born in," says Pinnell, smiling, "so I haven't made it that far yet."