Big in Japan, but What About Austin? 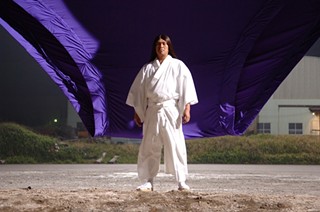 Japanese pop culture's longtime love affair with transformative everypeople who yearn to be bigger, faster, and stronger than the workaday, wage-slaving salarymen has never been so literally and strangely reimagined as it is in Hitoshi Matsumoto's Big Man Japan. An audience favorite at last year's Fantastic Fest, it's now making its U.S. theatrical debut in a limited test run here in Austin – courtesy of Magnolia Pictures and the Alamo Drafthouse – before expanding to New York and Los Angeles. (Matsumoto and Magnolia got here first, but they're not going to be the last to utilize the city as a test market: Sony Pictures Classics just announced they'll debut the Duplass brothers' Baghead here on June 13.)

"Matsumoto is the biggest television star in Japan," explains fan and Big Man Alamo Tim League, "and although Magnolia had already bought the film at the Toronto fest, they weren't at all sure how to market it to an American arthouse audience, because as crazy as this film is, it's also very dry. Later, at Sundance, I pitched them the idea of opening it in Austin and doing the local marketing in-house, which is what we've done: cut a trailer, did a press kit, all that stuff."

Yeah, but like Alamo stalwart Crispin Glover – no stranger to the surreal himself – once said, "What is it?"

It is comedy; it is drama; it is cultural critique. Director Matsumoto stars as a doleful, depressive semisuperman who, when he's not bemoaning his lot in life, can morph into a towering, purple-briefed behemoth via the local power plant. Retained by the government for pauper's wages, Japan's big man does battle with an increasingly freakish procession of equally mammoth invaders, even as he is openly mocked by the press, the populace, and his ex-wife. Part live-action, part CGI, and altogether odd, Matsumoto's epic plays like a dire, existentialist Woody Allen riff by way of Infra-Man, with a story that couples monster-mash mad-action with a very Japanese sort of postmillennial, comic anomie. Improbably, it works. But will it work outside of Austin?

"You have to explain, a little bit, what the movie is and who this guy is," says League. "The first time I saw it, in Toronto, the audience had no clue whatsoever that after a relatively slow, documentary-esque opening, the film switches gears and suddenly there's a gigantic animated bald man in a diaper and a bad comb-over attacking Big Man Japan. You've got to let the audience in on the joke, to a degree. Which is what we're doing, hopefully."