A Whale of a Tale Goes 21st Century 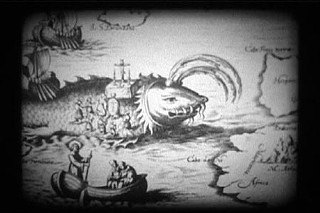 When you decide to adapt a literary epic about a massive sperm whale, then there's really no question as to size: Go big. That's just what filmmakers Ben Coonley, James Fotopoulos, and Spencer Parsons (a frequent Chronicle contributor) intend to do with a Fuse Box Festival event titled The Living Whale: A Marathon Misreading of Moby Dick. The trio, who met at the now-defunct Cinematexas, is commissioning dozens of filmmakers and multimedia artists to tackle each of Moby Dick's 135 chapters, plus the epilogue and an etymology. They figure it'll take about 25 hours, give or take, to screen (in one sitting) the omnibus film, but that's three years and three festivals down the line: In the meantime, they're putting together a more informal kickoff, with work-in-progress chapters, live performances, and Orson Welles ghosting about for a night that, according to Parsons, "is maybe more about getting out to sea with this thing than anything else." Expect the waterlogged puns to fly unfettered, along with inventive and experimental art plus homage.