You Do It to Yourself, and That's What Really Hurts

Humans wreaking havoc on Mother Earth, one disaster movie at a time 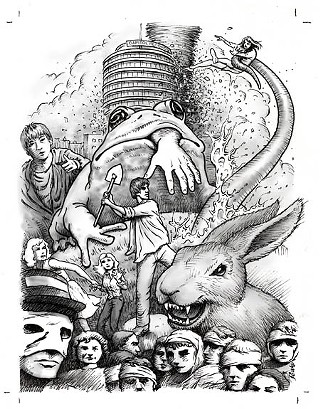 
The days of tying damsels to train tracks while wearing a monocle and stroking a cat are dead and gone, which means cinema villains now have to blithely pour gallons of formaldehyde into the water supplies of major foreign cities to prove the depths of their wickedness. Of course, to be considered sinister in this day and age, it also helps to be an American (we Americans are quickly becoming the new Germans in world cinema: ruthless, destructive, and indifferent to local sentiment, though probably more bumbling than cunning). Anyway, three cheers for South Korean director Joon-ho Bong's The Host for reveling in the absurdity of the environmental damage we humans do when we try to destroy the results of whatever environmental damage we've already done (in this case, a 30-foot mutant worm with a cranky disposition and a form that brings to mind the later work of both George Lucas and Georgia O'Keefe – and how often can you say that?) while celebrating the banana-peel-slipping, pie-in-the-face humor at the heart of any good nationwide institutional panic. – Josh Rosenblatt


"Oh noes," as Net kiddies might say, "epic pwnage by teh killer bunnehz!" In this B-grade thriller from perennial TV director Claxton, giant man-eating coneys are what come of a rancher's ill-advised tampering with the genetics of "mongrel rabbits" that have been devastating his crops. They don't actually instigate a worldwide apocalypse, the resultant cute-but-scary hares of hate, able only to terrorize a portion of the Southwestern United States before being conquered by a variation of the good ol' American ingenuity that caused them to go gonzo-monstro in the first place. Science giveth, and science taketh away faster than you can say, "Harry Angstrom," it seems, when wielded by the well-meaning humans in this 24-carrot gem of lousy eco-horror. – Wayne Alan Brenner


Sure, I snickered at the cineplex along with everybody else at Los Angeles' demolition in this Golden Rule depiction of eco-disaster end-times (to recap: Love your Mother Earth, lest she bite back with an awesome typhoon-and-ice fury). Then I moved into the Hollywood Hills, where my daily dog walks put me again and again in the eye line of the Capitol Records building, so memorably razed to the ground by tornado in Emmerich's film (as if the town didn't already have its hands full with earthquakes, brush fires, mud slides, and any number of celebutards). Now L.A.'s not the best place for a disasterphobe: I freely admit to an apocalypse kit, stocked with canned goods, bottled water, batteries, and – don't judge – mail-order "anti-radiation pills." (Hey, I knew a guy whose "kit" included a samurai sword.) But when you're staring every day at a cinematic signpost of the doomsday still to come, wondering if today is gonna be the day that precedes the day after tomorrow, suddenly that snickering feels like the happy ignorance of an innocent, or an idiot. – Kimberley Jones


Code 46 isn't one of those bad/good disaster movies, and the terror in its future vision lies less in its premise than in what we see behind the action. Its somber (and, frankly, rather confusing) plot has to do with the perils of genetic tinkering (basically, you can end up having sex with your kids, or possibly even yourself) and what happens when you break the titular law that tries to address those consequences. That, though, adds up to your basic forbidden-love story; what sticks in the mind is the film's setting: a bleak, arid earth with a killing sun and absence of apparent fertility. Shot largely in Dubai and Shanghai, the film posits a future corporate government and a battle with solar radiation – rush hour occurs at midnight, no one goes out unarmed against the elements – but also deepened class divisions that lead to full-blown exile of the less fortunate, banned from the eerily gleaming, cool-interiored cities and left to forage in the desert. It's the not-with-a-bang ending most of us anticipate these days, and Code 46 quietly assumes that slow wane. – Cindy Widner


"To the luck of the human race," says the perennially rumpled Leo McKern as he toasts the end of the world with a glass of water. Possibly the most polite apocalyptic movie ever made, this English doom-a-thon is mostly set in the offices of the real Daily Express newspaper, whose staff uncovers the world's temperature is spiraling out of control and everyone is going to die unless they get the story out (thus proving, once and for all, that journalists will save humanity). Originally, it was an atomic terror movie, with the U.S. and USSR setting off nuclear bombs at the North and South Poles, sending the Earth wobbling a little too close to the sun. But now it plays as a global warming movie, with the streets of London turned into arid dust-tracks, the ever-flowing Thames a dried-up riverbed, the evergreen Hyde Park a desert, and (gasp, shock) ladies wearing bikinis. Scandalous. – Richard Whittaker


With his 2002 foray into zombie horror, British director Danny Boyle reminds us why we should have listened to our mothers when they told us to follow directions: If you don't, you could potentially eradicate the human race. When overzealous animal-rights activists break into a primate research lab in Cambridge, intent on releasing imprisoned chimpanzees, they are warned by a scientist that the chimps are infected with something he calls "rage." The activists ignore the scientist, release the chimps, and are subsequently infected. Fast-forward four weeks, or, uh, 28 days, and we learn that "rage" has decimated the UK and possibly the world; way to go, PETA-heads! Some may argue that the film is a metaphor for our infection-paranoid culture (witness our love affair with antibacterial soaps and hand sanitizers, not to mention the global pants-peeing sparked by the SARS "epidemic"), but we just call it damn scary. – Melanie Haupt


Sure, you scoff, is it possible to differentiate industro-drab Sheffield, England, before and after nuclear Armageddon? After watching harrowing British import Threads – peeking through your fingers, preferably with a ready sick-bucket – you can. Made for the BBC at the height of the Cold War, in unflinching documentary-style, Threads follows Britannia's collateral damage destruction in a Russian-American nuclear war – and makes domestic miniseries The Day After look like a pub-hopping hangover. From an all-too-plausible escalation to the visceral, horrific blast, Threads' bleakest moments come as survivors endeavor to preserve some semblance of civilization – the frayed threads of human connection – only to encounter death and feral madness. Quickly shelved in England and making only sporadic stateside appearances, this magisterial dystopia's taken on a life all its own – where else? – online. (Search Threads on Google Video for the full program.) – Wells Dunbar


"It's not the end of the world, but with all our technology and all my money, we still can't get rid of these frogs. Interesting, isn't it?" Very: Released by American International Pictures in 1972 on a double bill with Godzilla vs. the Smog Monster, Frogs still has the power to unnerve. Twenty-six years after winning an Academy Award for The Lost Weekend, Ray Milland, cast here as an officious, wheelchair-bound Big Daddy in white linen suit and matching Floridian mansion, suffers a different sort of creepy-crawl when his family's Fourth of July gathering is invaded by all things amphibian. A very young Sam Elliott, as an earnest wildlife photographer, is on hand to witness nature in revolt, but the real stars of this Southern-Gothic-by-way-of-Creepshow are the stoically malevolent croakers 'n' hissers and the oppressive, swampy locale (atmospherically lensed by director of photography Mario Tosi). By the time Milland meets his match in Michigan J. Frog's bloaty minions, it's all you can do not to grab a gig and start stabbing at shadows. Ribbit up. – Marc Savlov

eco-disaster movies, The Host, Night of the Lepus, The Day After Tomorrow, Code 46, The Day the Earth Caught Fire, 28 Days Later, Frogs, Threads