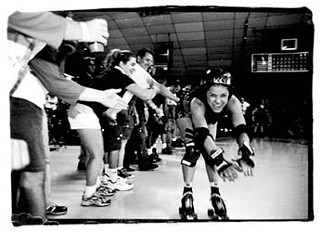 "Spank Alley" in Hell on Wheels, which screens this Tuesday at the Alamo Ritz

Wanted: Venues interested in booking high-octane, estrogen-fueled cinematic mayhem, Austin-style. Hometown circuit-grrrl squad a plus. Wusses need not reply; we suggest you go rent Rollerball or The Last Unicorn, instead.

Director Bob Ray and executive producer Werner Campbell have opted out – for the moment, anyway – of the Ninth Circle of Indie Filmmaking Hell, aka "Waiting for Good Dough," and are instead taking their Austin Roller Derby doc, Hell on Wheels, out on the road themselves, screening the spitfire-laden, ... And You Will Know Us by the Trail of Dead-soundtracked, all-guts, all-glory, all-girl festival favorite as far as Birmingham, England, and São Paulo, Brazil, and as close as the Alamo Ritz.

"We're not actually four-walling as of yet, thankfully, because we've got a built-in audience in cities that have their own Roller Derby leagues," says Ray. "It's the towns and theatres that aren't aware of Derby where it's been a tougher sell. We hit a little speed bump in Atlanta – which has a great Derby scene – but because that particular league hasn't yet worked with a theatre, we have to educate them on what the film's all about. Usually, though, it's been a case of people and cities approaching us about doing a screening, which is very cool."

Ray's adventure in road-tripping (or his potentially risky sea venture aboard an S.S. Minnow-esque dinghy and/or Song Dynasty-era Chinese junk, in the case of Birmingham) isn't his first time taking it to the streets.

"I self-distributed Rock Opera, I know Kat Candler's done a ton of self-distro, and it's pretty rare for a filmmaker to have people asking for screenings, or at least as many as we have. Usually it's the filmmaker's job to do the begging and the pleading and the twisting of every arm you can get ahold of.

"We've had Roller Derby leagues from all over contact us, though. Montreal called us to screen during their upcoming Beast of the East tournament. As of now, we've got seven tour screenings that are pretty much locked, but that's just the start. We've been contacted by something like 80 leagues or theatres. It's insane."

Hell on Wheels screens at the Alamo Ritz on Tuesday, April 8, at 7pm. To purchase tickets, see www.originalalamo.com. 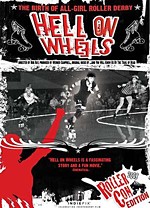