Austin's hopping again, with TV and film projects set to shoot soon; plus, Smithville's got a Poop Bandit

Just as Friday Night Lights looks almost certain to return as part of an NBC deal with DirecTV, the CW has given the green light to Austin Golden Hour, a series pilot about a group of emergency medical technicians and emergency room doctors working frantically in the pivotal hour after a trauma in the capital city. My sources say we can expect a summer filming start for season three of Friday Night Lights here in a balmy Austin July, but NBC folks will neither confirm nor deny a deal that would have DirecTV air episodes first – probably on its channel the 101. Expect details to shake out about the time this hits print. Meanwhile, Variety says Austin Golden Hour will be in real time, similar to 24. While the show is definitely set in Austin, the big question remains how much of the pilot will actually shoot here. Bob Hudgins of the Texas Film Commission says he's heard rumblings of the show, which was originally set in another city, but hasn't yet been in contact with the CW. Casting notices for the show list the location as to be determined. "The three toughest locations to find are hospitals, jails, and schools because they have a mission and aren't that interested in having it interrupted," says Gary Bond of the Austin Film Office. That means the show's hospital will likely be a set. American Idol producer Simon Fuller's 19 Entertainment is behind the show, which appears to be based on a similar 2005 BBC series titled The Golden Hour.

Friday the 13th is officially set to begin an eight-week shoot here April 21, from the same Platinum Dunes folks who brought you two The Texas Chainsaw Massacre remakes and The Hitcher reimagining. Marcus Nispel, the German video director who got his big-screen start directing 2003's Chainsaw, is back at the helm for this remake with Jared Padalecki (the CW's Supernatural) reportedly in negotiations to star as a guy investigating what really went down with that hockey-mask-wearing Jason at Crystal Lake. Producers Andrew Form and Brad Fuller have been enthusiastic about Central Texas as a filming location since the original Chainsaw redo, when I spotted them wearing Hutto Hustlin' Lady Hippos T-shirts.

Strangest rumor from the set of Terrence Malick's Tree of Life, now shooting in Smithville, Texas, with Brad Pitt and Sean Penn? How about the Poop Bandit who likes to leave a special surprise on the patios of some houses used for filming. He remains on the loose... Early local casting and location scouting is under way for the low-budget Kick the Can, an adaptation of PBS news anchor Jim Lehrer's picaresque Fifties novel of the same name, which is partially set in Galveston. Look for Austin to fill in for Kansas locations... Willie and Me, a road-trip film about a German woman aiming to see Willie Nelson's farewell concert that I first told you about last year, is looking close to a shooting start date. Originally, a Nashville shoot was planned, but Willie apparently said he'd never do a (even fictional) farewell show anywhere but Austin. 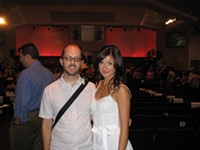