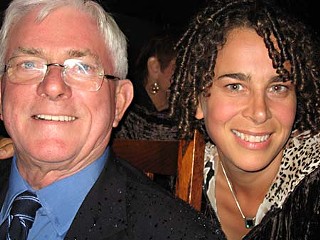 It was probably inevitable that Phil Donahue, the father of the modern daytime TV talk show, would make an anti-war film. This war, that president, that bunch of rubber-stamping idiots in Congress –every minute of whose prewar "debate" Donahue had watched on C-SPAN, as they mouthed talking points scripted by the warmongers, before green-lighting the resolution and heading home for midterm elections. Donahue's last and short-lived gig on MSNBC had ended in '03 when the network became skittish that his bad prewar attitude was making them look unpatriotic. His eponymous, pioneering talk show had ended back in '96, after an award-winning 29-year run. So there was Donahue, sidelined and fuming, his mic turned off at a time when he had the most to say. In times like these, how long, really, could a 72-year-old talk-show host manqué be expected to sit on his hands?

Not too long. In late '04, Donahue accompanied his friend Ralph Nader on a visit to a seriously injured young war vet, Tomas Young, at Walter Reed Army Medical Center. Donahue was appalled by what he saw: a 26-year-old, soon-to-be-married young man paralyzed from the chest down, taken out by a shot just above his collarbone only five days after landing in Iraq. This, the tangible outcome of this ill-conceived, misguided war that we'd been duped in to by the Bush administration. (Young had enlisted with the intention of deploying to Afghanistan.) After seeing Young and his mother overwhelmed by his grave injuries, Donahue realized there was no way he could "simply tell this kid to have a nice day and then disappear; I knew that people needed to see this, and somewhere along the line, I nominated myself to try and make that happen."

Subsequent visits with Young, in which he observed Young's tragic struggle to adjust to the horrors of his new physical reality, cemented Donahue's resolve to tell Young's story. He got to wondering about Young's politics on the war. When he spotted a "Draft Republicans" bumper sticker lying on his dining-room table, Donahue realized to his delight that "what we had here was a warrior-turned-anti-warrior." At that time, he was thinking "book" as the likely medium for this message.

Enter Ellen Spiro, a documentary filmmaker (Roam Sweet Home, Atomic Ed & the Black Hole, Troop 1500) living in Austin and teaching filmmaking at the University of Texas. Donahue chanced to meet a friend of Spiro's in the alternative-media business, DeeDee Halleck, and they chatted about his book idea. Halleck suggested a film might be a better vehicle for making Donahue's political point and gave him Spiro's phone number. Although Spiro almost hung up on the guy "claiming" to be Phil Donahue, a few days later, she was on a plane to Kansas City to meet the wounded soldier. This meeting would allow Spiro to assess both Young as a subject and Donahue as a co-director and executive producer (the money guy). Spiro, who works with producer Karen Bernstein, had never split a director credit with anyone, much less a former talk-show host who'd never made a film before, even if he was the guy who many credit with putting the "heart" in "bleeding-heart liberal" –in a good way.

The first meeting convinced Spiro that she wanted in on this film. As she recalls, "Tomas was in really bad shape when I met him –on major morphine doses and pharmaceuticals and couldn't really form a sentence, but there was something about him that I immediately fell for. He was so charming and funny." Says Donahue, with signature verbal imagery, "Ellen grabbed hold of Tomas with both hands." She also grabbed her camera and proceeded to forge a relationship with Young and his family. The footage she subsequently delivered to editor Bernadine Colish was a three-pronged chronicle of Tomas Young's life: his evolving relationship with his new wife; his political awakening, which Spiro analogizes to an amalgam of the characters in Born on the Fourth of July and Coming Home; and his struggle to come to terms with his overwhelming disabilities.

While Spiro was off shooting Young, Donahue was hunched over a computer with an editor in New York, culling incriminating segments from more than 100 hours of the C-SPAN congressional debate footage, including the roll-call vote, that had so infuriated him when he'd watched it live in '02. It was when the two co-directors reconnoitered at their editing space in New York – each bearing their respective contributions – well, that was when began the spirited negotiation that threatened to sink the enterprise.

Call it differing artistic visions. Spiro presented her filmic story about Young, a masterful blend of the art of documentary and cinematography. A story whose politics emerged from the story itself – subtly. Donahue wanted to intercut –okay, interrupt –the flow of Spiro's "decisive moments" with the cuts he'd so painstakingly pulled from the C-SPAN debates: snippets of lawmakers grandstanding (some of whom are running for president), parroting the WMD panic that we now know was hype. And then the gavel-punctuated roll-call vote, in which all but 23 senators and 133 congressmen voted "aye," and the contrapuntal dissent of 90-year-old Sen. Robert Byrd, pleading for restraint and reconsideration.

"It did feel like two separate stories," recalls editor Colish, who was caught in the middle. Donahue wanted the C-SPAN material because he wanted a hard-hitting film with an in-your-face political statement; Spiro thought Young's story – the characters, their circumstances – made the identical points, poetically. "Ellen and I were like two type-A personalities sitting back-to-back on one horse, trying to make it go in different directions," jokes Donahue. "But I want you to know, there was nothing unreasonable about Ellen's initial hesitation. It was like she'd painted this fabulous picture, and a guy walks in with a bucket of yellow paint and says, 'Hey, I want this in there, too.' And she says, 'I don't need yellow paint; my painting is finished.'"

"That tested us pretty good," Donahue admits. Other opinions were sought, notes solicited from the likes of Elaine May, Michael Moore, and Donahue's wife, Marlo Thomas. Pity poor Colish, says Donahue: "She really respected Ellen, but then she had to deal with this old gray-haired talk-show guy standing behind her waving his arms. About three weeks into this editing with Ellen and Phil on the 14th floor – I had a lock installed on the window." He laughs, as they all do –now.

Luckily the tension broke when a fortuitous scene presented itself and managed to neatly tie up the two divergent strands of the film to Spiro's satisfaction. "In the end," she says, "I came to see the need for 'hard-hitting,' and once the debate footage, which started out as an albatross, became a dynamic force in the film, I liked it. It has a real energy now."

Collaborating with Donahue on what she used to kiddingly refer to as the "Philm" turned out to be a good thing for Spiro. In fact, she'll tell you – and also plans to tell her students –that collaborating with someone with completely different sensibilities and learning how to compromise is a terrific exercise in "creative expansiveness."

"Once you get past the terrible feeling that by compromising, you've sold your soul or given away your child, you work on it some more, and you realize you've got a better result, which is what happened to us." She adds, "Phil pushed me in ways that made me a better filmmaker. He always said that it was important that we not sanitize Tomas' situation or the war but show the pain," which empowered her to shoot the delicate scene in which Young's mother helps him change his catheter in the back of his van.

With harmony restored in the editing room, there remained one more piece to fall in place –the soundtrack. That would happen a little later, through pure serendipity, when Donahue met Pearl Jam's Eddie Vedder, who then volunteered to write two original songs for the film. (Vedder also worked with Young to compile an ancillary promotional CD.)

Body of War premiered at Toronto International Film Festival to a standing ovation. It was short-listed for an Oscar nomination, though it did not make the final cut. And now it's beginning a limited theatrical distribution, for which Donahue is completely pumped and determined to expand nationwide. "We're off to the races on this one," he says.

Just goes to show you can take the talk show away from the host, but his mic won't stay unplugged for long.

Body of War screens at South by Southwest Film Festival on Thursday, March 13, at 4pm at the Paramount Theatre with the filmmakers in attendance. It opens in Austin on Friday, March 14. See Film Listings for a review.