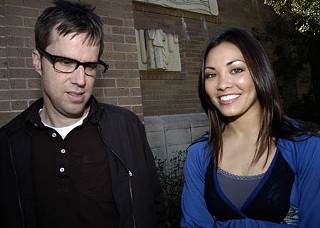 I can't be sure if it's affectation, emulation, coincidence, misperception, or a combination of the four, but I get an Andy Warhol vibe – in person and in his output – from Bob Byington. He has a soft, clipped, occasionally high voice. He's careful in his movements and exerts control on the tone and measure of a conversation, or of a scene, just by being in the immediate vicinity and closely monitoring his own. He's intelligent and curious. He has an alien observer's understanding of men and women, registers oscilloscopic readings of sexual identity. All while coming across as laid-back and funny.

In conversations with Byington about his new movie, Registered Sex Offender, there exists a sense of beyondness. Beyond the movie, beyond moviemaking, beyond the conversation, beyond talking in general, beyond South by Southwest, beyond success. It's not willful; he doesn't mean to imply he's beyond everything. He's a personable guy, a good interview. But he's an artist: He trusts the work. As John Wilcock wrote in a watershed 1965 Village Voice profile, "If Warhol has any specific point of view, it is probably that what happens happens; he's having a ball learning how to make home movies, and it's merely gravy to him if the movies become valuable art works because he happens to have made them."

Byington's movies are at the moment much closer to home than they are to the MoMA, and the work doesn't always speak for itself. "He gives the impression that he doesn't care," Wilcock wrote of Warhol, "and yet he obviously loves the publicity that has come to him." Byington is image-conscious, media-savvy, and intent on making sure that what he has made is seen. And that the people who have helped him make it are rewarded.

"I'd like it to have a nice life," he says. "It's like maybe wanting a basketball scholarship for your kid or something. You want it to get out there a little bit. With the market changing for how people get stuff, like DVDs and downloads and whatever else, I kind of hope that the movie can make it into some type of distribution, whether we're doing it or someone else is doing it, where the word's out to a degree among people who talk about this kind of thing. It's an entertainment. I want people to be entertained by the movie. We learned a lot about what that meant."

For RSO, a relentlessly entertaining chronology of a convicted sex offender's rehabilitation upon release, what that meant was "making jokes work. It's a really specific endeavor, and I don't think I knew that when we started," he says. "How do you make jokes work up there? Do you use reaction shots? Do you not use reaction shots? Do you use people who know how to do comedy? Do you use people who don't know how to do comedy? There's a whole ... it's my job to know what you're good at. ... I really like a mix. There was a genuine mix of sensibilities."

Radical collaboration didn't start with the Factory, and it didn't end there, but when you listen to someone talk about things in the way that Byington does, it's hard not to hear echoes of the place. He immerses his projects in options instead of paring them down. He relies on what's in his slim, unpronounced gut and on other people pulling it out and going their own way. The approach is by no means unheard of these days, but this is: His instincts are transgressive, and he figures – whether he's considering script and improvisation, predators and prey, fathers and sons, lovers and wannabe lovers, actors and nonactors, this one-sheet or that, "I'm going to face-fuck your bear" or "I see we share a similar taste in footwear" – he's at least among friends while he's exploring them. He's not in it alone.

And if he goes down, everybody's going down with him.

Bob Byington – who is from Lincoln, Neb.; went to school in Santa Cruz, Calif.; lived in Austin for as long as he can remember; opened SXSW 98 with his Olympia; won the 2004 Austin Chronicle Short Story Contest; recently received an Annenberg Film Fellowship grant from the Sundance Institute; probably paints; and wants me to tell you he's 30 although he's closer to 40 – recalls two stories about how RSO came to be. Both involve the film's twentysomething leads; both are indicative of his Warholian pursuit of the muse as budding superstar; one concerns how one would end up as the film's de facto editor and savior.

The subject of story No. 1, Gabriel McIver, used to do theatre in Austin but now lives in Los Angeles and works at an adult bookstore called the Pleasure Chest. He will be in attendance during SXSW. "You should meet him," Byington says. "Everybody should." The subject of story No. 2, Kristen Tucker, an actor and University of Texas engineering grad from Houston, says of story No. 1's subject: "I just remember when I first met him, these shockingly sexual things would come out of his mouth, but I never really had any negative response to them. They just mostly seemed innocent somehow. And funny."

Story No. 1: "I just met him," says Byington of his lead, McIver, "and he just had this really engaging quality. I thought maybe we should make a whole movie about this guy and have him be a sex predator. I think the idea was percolating, but when I went home the night that I met him, I started writing. It's a very specific moment. He was sitting with us, and we were talking about film production stuff. Somebody asked me a question about transferring film to video, and Gabriel had zero experience with that. Didn't know the first thing about it and interrupted me with an opinion about it in a really confident, straightforward way. And he didn't have any idea what he was talking about. At all. And at that moment, it was like, bam. ... I was trying to get Gabriel, you know? I was trying to get him. I was trying to get his energy onscreen. And I wanted to do it for 75 or 80 minutes, and I thought we could. Yeah, he's gonna rub some people the wrong way. But I think we found a framework for him to function as a character in a story."

Story No. 2: "Kristen's background as a microprocessor designer really helped us. We were trying to structure the material in the movie. ... We needed that. We brought an editor in from Los Angeles last year to take a look at how the story was revealing itself in the material we shot. It was hard for me, because he had very little patience for my ideas. He saw the material very differently from how I saw it. And I'd hired him to come in. ... When he left, Kristen became his legacy. She became the point person as a champion for a tightly structured story. Which is not how we were really working when he got there. But it's how we proceeded once he left, and what was great about Kristen was there was no drop-off from this guy who we brought in. She inherited his attitude very gracefully."

McIver, deadpan and sociopathic, plays our unnamed RSO navigating probation, counseling, community service, "neighbor advisories," re-employment, and the porn section at I Luv Video; Tucker – when not negotiating what she calls the "energy Bob wants around a scene that he puts ahead of whether or not it fits logically and whether it's reasonable for the audience" – plays Tina, the somewhat ironically supportive girlfriend. They are bolstered by a cast that includes notables like Andrew Bujalski as a "noncompulsory" counselor, Kevin Corrigan as a group therapist, Jimmy Gonzalez as Tina's brother, Suzy Nakamura as a probation officer, Nick Offerman as a cell mate, as well as Ross Brockley, Rick Linklater, Cyndi Williams, and Caveh Zahedi in cameos.

Taken together, they've made one hell of a mockumentary. It's clear when I toss around the term that Byington takes it as a vulgarity, but there's no other way I can think of – in conversation or with so few words remaining – to describe the shape-shifting, HD-shot Registered Sex Offender. "We don't want our movie to be fiction or nonfiction," he says. "We kind of want it to be both. I think mockumentaries let the audience off the hook, and we don't want to let you off the hook.

"We're playing with an idea," Byington continues, as cool, detached, and intuitive as Wilcock would describe Warhol 40 years before. "I think it's interesting that no one's ever done a comedy about a sex offender. It's such a funny, obvious idea. It is. It's ridiculous. It's so easy."