The Coast of Utopia 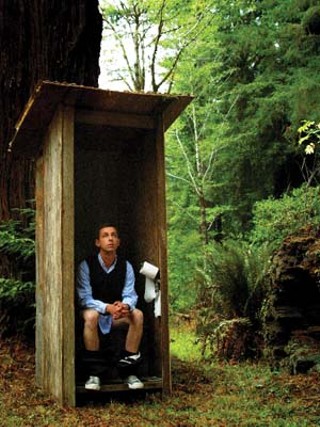 It's the same old story:

Childhood friends from St. Louis, weened on a diet of Hal Ashby, Bob Rafelson, gefilte fish, and a side of plain wheat toast, grow up, move to Los Angles to pursue acting careers, write a script, get bogged down in beautiful people, and then high-tail it out of the City of Angels to Northern California's last bastion of hippified hedonism, Humboldt County, where they promptly ditch Script A and concoct Script B, which they then co-direct themselves with a cast including Peter Bogdanovich, Brad Dourif, and Frances Conroy, before entering the finished homage to their cinematic heroes in various and sundry festivals, where they do or do not win scads of awards, thereby ensuring a favored place in the annals of Hollywood history. Madcap hijinks ensue.

It's a pretty accurate summation of Darren Grodsky and Danny Jacobs' story so far. And Humboldt County, their pitch-perfect directing debut, which traces a path from the crumbly bedrock of Sixties-era countercultural utopianism to the new millennium's angsty uncertainty, is, in fact, a smart, moving, and altogether canny glimpse into the heart of a shell-shocked American dream. Its character-driven dynamics – involving an extended clan of pot farmers in the wilds of Humboldt and the outsider who shows up and changes everything – are something rarely found outside of today's pseudo-arthouses.

"We were incredibly lucky," says Grodsky, "because we were able to meet with Peter Bogdanovich and the great cinematographer László Kovács just before [Kovács] died. László shot all of Peter's films except The Last Picture Show – he did Targets; Paper Moon; What's Up, Doc? And it was amazing to hear them just talk to each other, because, you know, those were the films that inspired us to do Humboldt. The movies we love are virtually all character-driven films, and so that's what we wanted our film to be, too."

"Being actors ourselves," notes Jacobs, "we kind of despise the typical, five-minute meat-market audition process, and so we set up a casting process that allowed us to sometimes meet with an actor for 30 to 45 minutes, with a lot of improvising and playing and seeing what ideas the actors might come up with on their own."

Taking that extra time proved key to crafting the unassuming naturalism of the finished film, which, although it tangentially incorporates a key battlefront of the government's war on drugs (marijuana), never fails to put substance over style.

"These are people who are full of contradictions," adds Jacobs. "At first you think they're just a bunch of pot-growers in the woods, but then you realize that they're quite intelligent and insightful and so much more than what they first appear to be."

So would it be fair to say that the film's marijuana angle is really, in the end, no more or less than a MacGuffin used to draw the viewer into the familial dynamics?

Jacobs: "Absolutely. From the very beginning, Darren and I were really intent on not stepping into that battleground area."

Grodsky: "We weren't trying to make a statement about pot, about these people's lives versus the lives of, you know, people in L.A., or anything along those lines. That would have made it too easy on the audience."