Nathan and David and 'Goliath'

After years of making shorts, the Zellner Brothers go big 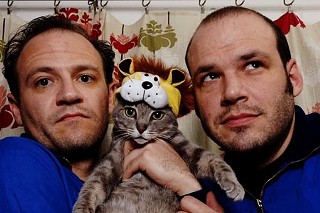 After Robert Rodriguez, David and Nathan Zellner are arguably the most prolific filmmakers in Austin. Over the last decade, the duo has released three features and no fewer than 10 shorts, not to mention music videos for such local bands as the Octopus Project and the Precarious Warehaus Dwellers. And unlike the Spy Kids director, the Zellner Brothers have been doing it all while getting up and going to office jobs every morning, which makes the abundance of their output all the more impressive.

Though the standard bio sheet would probably place the beginning of the Zellners' career at 1996, when their short film "Gentleman Caller" screened at the South by Southwest Film Festival, their collaboration actually goes back much further. The sons of Texas A&M professors, David, 34, and Nathan, 32, were filmmakers from childhood, making movies at home using little more than a camcorder and their enthusiasm. And though it was David who would end up a film student at the University of Texas, it wasn't until Nathan moved here upon graduating from A&M that things started coming together.

The brothers released their first feature, Plastic Utopia, in 1997, followed by 2001's Frontier, which takes place in the fictional country of Bulbovia and is told in the equally fictional language of Bulbovian, which the brothers invented and then subtitled for the film. ("Frontier had a very tiny demographic that it appealed to," David admits.) Then came their successful short-film period, which further developed their particular blend of deadpan humor, cosmically misguided heroes, and butchered foreign accents. (See ZellnerBros.com to view some of their shorts.)

2008 marks the return of the Zellner Brothers' idiosyncratic language to the world of feature films with Goliath, the story of a nameless everyman (played by David) whose life unravels following an acrimonious divorce, a demotion at work, and – unkindest cut of all – the sudden disappearance of his beloved cat. The movie's Beckett-esque blend of tragic absurdity and slow-burn comic misery won it a place at this past February's Sundance Film Festival (the first for a Zellner feature). With Goliath set to premiere in Austin as part of South by Southwest's Special Screening series, David and Nathan recently sat down to discuss their feelings about SXSW and Sundance, the secret to the Zellner brand of humor, and their abiding love for Max von Sydow.

Austin Chronicle: Your reputation as filmmakers has come primarily from your short films. Why did you decide to go back to features?

David Zellner: After Frontier, we had decided it was time to start making shorts again, mainly because of issues of time and money. We figured if a short failed, it wasn't that big a loss. The features we shot would take two years to make and wouldn't go anywhere or get much attention, but with the shorts we could experiment with different approaches and try to find our voice. We weren't so worried about failure. And that's when we started to get some exposure. So we did those for several years. Then when we'd gotten all the mileage we could out of making shorts and we felt ready to do a feature, we started working on Goliath.

AC: How did the story for Goliath come about?

DZ: Well, usually I get an idea for a story or a character when I'm running or just driving around. For Goliath, I had seen a dead cat on the road for several days going to and from work, and I started thinking about if that was my cat how I'd deal with it.

AC: How did the movie get into Sundance?

DZ: We'd been in Sundance with shorts for three years [2005's "Flotsam/Jetsam," 2006's "Redemptitude," 2007's "Aftermath on Meadowlark Lane"]. When we started making Goliath, I didn't want to even tell anyone it was a feature because it was the kind of thing that if we failed, we could just hide it and pretend it never existed. Back when we started filming, we didn't even tell cast members it was a feature.

Nathan Zellner: We didn't even give them the full script. [Laughs.]

DZ: It wasn't completely conscious that we did it that way; it was all on the down-low. Then when the movie started coming together and we felt happy with it, we sent the cut to Sundance. We were nervous because we weren't sure if they were sick of us yet. Fortunately they weren't.

DZ: It was great. When you do shorts, you're kind of under the radar; your film shows with a bunch of other films. With a feature you get more attention, more press. It's cool because people are coming to the screening specifically to see your movie. We had a screening at 8:30 in the morning on a Saturday, and it was our biggest crowd.

NZ: We'd shown the movie twice by that point, so hopefully it was our biggest crowd because there had been a little word of mouth and people had heard good things about it. We don't know if that's actually true, but we hope it is.

AC: How are Sundance and South by Southwest different?

DZ: Well, at Sundance it's freezing cold and you're bundled up the whole time. Here, South by Southwest takes place during the best time of year, which gives visitors an interesting misconception that Austin's always really pleasant and wonderful to live in [laughs]. Sure the weather is perfect today, but in two months it's going to be hell. But they won't ever experience that.

South by Southwest is also more laid-back. Sundance is more stressful because you're trying to promote yourselves and maximize the publicity and sell your movie. Here we can relax more.

NZ: But it's been amazing watching South by Southwest grow over the last 10 years into a real internationally recognized festival. I remember when we went to the Festival in 1996, and they had the awards ceremony in the Convention Center ...

NZ: Now it's this big event, and you've got all these people coming from out of town. It continues to get more relevant and exciting.

AC: What do you find funny?

DZ: Other people's tragedy is always funny [laughs]. Anytime someone's passionate or fanatical about something. That intensity. People trying to accomplish something and failing: That's funny to us.

NZ: Which you can probably tell from our movies. [Laughs.]

AC: What's one movie you wish you'd made?

AC: I guess that goes along with your interest in fanaticism.

NZ: Yeah, also we like the idea of filming in remote, exotic locations. Who wouldn't want to make a movie in a South American jungle if they could?

AC: Which one of you has the final say?

NZ: We try to be diplomatic.

DZ: Even though we have different roles, it's always crucial that we have a consensus on the finished product. I direct, and Nathan produces and edits. My strength is more the creative end with the stories, and his is with the technical end, which I'm just completely dumb with. So we're able to bring our different skills to the table. We always try to find common ground. If we ever disagree, it's usually over a small detail, usually in the idea stage.

NZ: It's no different than any other collaboration. You have to be on the same page going into the project.

DZ: And when all else fails, we wrestle to determine who's right.

AC: Who would you want to work with most?

DZ: If we could one day work with Max von Sydow, that'd be really cool. There are lots of people we'd like to work with ... but we have to start small.

NZ: After Max von Sydow, we can quit making movies.

AC: Did you have any celebrity run-ins at Sundance?

DZ: From afar we saw Reggie Bush and 50 Cent. They were both surprisingly short.

NZ: No personal run-ins, though. 50 Cent didn't come to the Goliath screening.

DZ: We saw Mary-Kate Olsen walking up the street, and from behind she was being followed by paparazzi, and then coming at her from the front was this gang of soccer moms ...

NZ: ... who were pushing their kids at her, yelling, "Go get her! Go get her!" It was really surreal.

AC: Do you think Goliath is a success?

DZ: Yes. I think we accomplished what we set out to do with it. It's a tiny film, and it's not for everyone, but I'm totally happy with it for what it is. But I'm also excited to go off and do something different.

NZ: I think we can do a lot better than we've done. But that's part of the fun. Trying new stuff and seeing what worked and what didn't and learning from how our process is evolving: That gets me excited.