Tweet
print
write a letter
The era of the little game is hardly upon us. The Grand Theft Autos and BioShocks still rule the gaming roost, but the Wii is the little system that could, and the handheld Nintendo DS, the fastest-selling platform on the market. Meanwhile, the big boys, Xbox 360 and PlayStation3, offer downloadable content to stay small and capture the casual market. The casual gamer isn't wowed by hi-def bells and whistles and would rather zone out and then continue on with his or her normal life. Gaming and a normal life ... what will they think of next?

The Wii's downloadable content, acquired via its Virtual Console, consists of classic Nintendo titles. That's a good deal of quality nostalgia – I could play Kid Icarus for hours – but nothing new for anyone around the age of, say, 30. Xbox Live and the PlayStation Network are where you'll find new, addictive titles and vintage arcade rarities to fill up your time when you're not at work, because playing Bejeweled at home is pathetic.

Xbox Live sits on the online gaming throne thanks in no small part to the Halo franchise, and while they offer new titles regularly, recent releases simmer in the casual-gaming mold.

Omega Five offers solid, side-scrolling action that plays more like an experiment in sensory overload. One thumb controls where you move, and the other thumb where you shoot. It's as simple as that but painfully difficult. From the moment you start in one- or two-player mode, you're bombarded by robots, aliens, and robot-aliens. Rule of thumb: Don't stop shooting.

Cooked in the Tetris mold (like so many casual puzzle games), Boogie Bunnies plays more like Bust-a-Move. The bunnies keep encroaching as the insipid music starts to mess with your head. Throw similar-colored bunnies together, and they'll disappear. Dancing bunnies mean extra points, and yet I still find myself resenting the funky little suckers. The puzzle gamer/cute-bunny lover in your life will eat it up. Everyone else? Stick with the Russian severity of Tetris or the Japanese asceticism of Sudoku.

Disney, capitalizing on the unfathomable popularity of Tron, made 1983's arcade oddity Discs of Tron so people could relive the "excitement" of a small fraction of the movie. Throw discs, and don't get hit by your opponent's discs. Like reverse Pong, and just as enjoyable.

Commander: Attack takes the turn-based strategy game and sprinkles just enough old-school charm and kitsch to make it worth your while. Take the chance out of Risk, and you have this art-deco-inspired war between humans and superhumans. Enjoy your underdog status. The game is easy to learn but quickly ramps up in difficulty. Strategies get complicated quickly, and before you know it, you're trying to destroy the enemy stronghold without realizing they're sacking your headquarters.

What Xbox Live does have is choices, and once downloaders define their niche in the casual-gaming world, they'll find something to waste hours playing. Give me Asteroids any day. 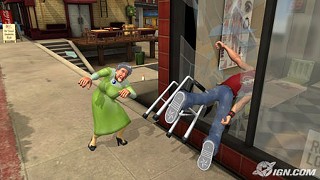 There's no denying that Xbox Live has PlayStation beat as far as downloadable games go, but Sony is doing its damnedest to catch the wave of online action. The PlayStation Store is chock-full of game add-ons, PSP downloads, and a sampling of downloadable games. For those not content with playing Go! Sudoku onscreen – who are you? – PS3 introduced these three worthy downloads over the past year.

Sony's Snakeball is more than your average puzzle game. Gliding over a pixilated floor, picking up multicolored balls, and adding them to a trailing tail, the player navigates the likes of obstacles and mines in an attempt to deposit the balls in their respective goals. It's like Japanese basketball on acid. It's as addictive as all those arcade games of yore, but it looks a hell of a lot better.

And then there's Pain. Call it Jackass for PlayStation. Using nothing more than a human-sized slingshot, the dumbass flies toward buildings, billboards, and moving cars in order to create the perfect chain of events. The more "pain" you cause by smashing into windows, tossing bombs midair, and straddling barricades, the more points you accumulate.

After a night of self-inflicting pain and scooting around on an ice rink at high speeds, flOw is a joy. Developed by two University of Southern California doctoral students as part of a thesis, it's pure therapy. Set against a brilliant blue background, flOw uses no controls other than the PS3's underutilized Sixaxis wireless controller. Tilt forward, and a tiny aquatic organism dives forth eating whatever is in its path. It's slow and surreal – onscreen yoga – and while flOw might not scratch that gaming itch, it's quite possibly the next generation.

So take that, Xbox 360. We don't need your stupid headsets and plethora of gaming choices. Sony is taking baby steps toward the modern-day gamer with these creative options. And surely there are many more to come.

On the Download
New in downloadable games: DeathSpank and Limbo