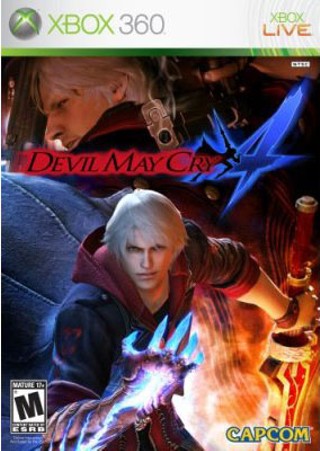 
The formula for a Devil May Cry game is straightforward: superfast action combining sword and gunplay, a brutal difficulty curve, lots and lots of demons, and some goth-rock. The newest entry, cleverly titled Devil May Cry 4, is the first to be released on the newest generation of consoles and is a visual feast. The game does what one expects from a sequel but doesn't add anything particularly revolutionary.

A strong animé bent, absurdly large swords, and superhuman acrobatics set the stage for a combo system that continues to deepen as you unlock new moves to add to the mix. Besides just completing each level, you're scored based on speed, combo chains, and damage-avoidance. As you improve, you'll be enticed to replay the levels on harder settings in order to improve your score. After a lot of practice, you'll get in a "groove" – pulling off a long series of assaults on whole rooms of enemies at once, and at these moments, the game really shines.

The game's visuals are stunning, showcasing gorgeous vistas and highly detailed interiors. The all-too-frequent cut-scenes feature beautifully realized characters and have amazing production values. Unfortunately, the characters are uninteresting and the dialogue overly serious. A heavy metal soundtrack cranks up whenever you're in combat (so pretty much all the time), becoming grating after just a few battles. The game features six levels of difficulty, which range from fairly reasonable to utterly insane. There are also a slew of hidden levels and unlockable features that will keep fans happy. Infuriatingly, the camera retains a habit of jumping around in the middle of a fight and ruining a complex combo, which is a severe flaw in a game that prides itself on furious, nonstop action.

Rated 'E' for Everyone
A smattering of kids games for gifting