Sometimes the Music's in the Scratches

In defense of the bootleg

Tweet
print
write a letter
Normally, I'm loath to indulge that common cine-geek urge to one-up all comers with a story about how I first saw that obscure cult-object of desire, before everyone knew it was cool and years prior to its legal arrival on video, not to mention that back then it was better. Nevertheless ... my first screening of Monte Hellman's Two-Lane Blacktop a dozen years ago wasn't in a cinema but rather on a film-chained VHS bootleg of a scabby, taped-together, 16mm college-circuit print, played on an ordinary old 19-inch TV that had an obvious, if unrequited, disdain for the color green. A box-office dud more or less suppressed by an embarrassed Universal until 1999, this was a film prized among cinephiles like samizdat, arriving in my hands on one of those tapes as precious for the entertainingly libelous yarn about its provenance as for its actual contents. Not to say that the contents weren't considerable, but if context isn't all, it can mean a hell of a lot, especially when you're dealing with the kind of angular, allegorical minimalism that favors landscapes over the speed of the cars traveling through them and traffics in character names like the Driver (James Taylor), the Girl (Laurie Bird), the Mechanic (Dennis Wilson), and GTO (Warren Oates).

So it took no small effort to apprehend this mythic, existential road movie obscured by a fog of purplish skin tones, scratches that extended into the black bars of its letterboxing (at least it was wide-screen), and the considerable violence done to the sound mix along the way. But I loved it, and whether you're talking cars or movies, perhaps truer words were never spoken than in one of GTO's splendid lies: "There's nothin' like buildin' up an old automobile from scratch and wipin' out one of these Detroit machines. That'll give you a set of emotions that'll stay with you. Know what I mean?"

Not that I'm complaining about the souped-up video transfer and trunk-full of extras in this big block (including docs, commentaries, Rudy Wurlitzer's screenplay, and a thrillingly passive-aggressive interview with James Taylor). But perhaps more than any previous release, Two-Lane Blacktop reveals limitations in the Criterion approach that sets the bar for home-theatre-centric cinephilia. Picture and sound quality are exquisite, and the extras, mostly produced by Hellman himself, are affectionate and informative, so for any fan, this box is nothing short of essential. But on a good flat-screen in a living room, the film's very American retooling of Antonioni-style minimalism offers its design for appreciation as an art object, without quite handing over the keys for a drive at the horizon. Personally, I need something a little less academic, a little more hypnotic, and not a little bit disreputable. While most of the performances suffer somewhat without the scale and starkness of a bigger screen or the involving abstraction of a fuzzier one, whenever Warren Oates' hilariously, indestructibly tragic GTO takes the wheel, Two-Lane Blacktop still unfolds in a great, skuzzy drive-in of the mind. And those satisfactions are permanent. 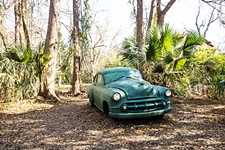