Misleading in that all but four titles of Akira Kurosawa's dynastic oeuvre followed World War II, Postwar Kurosawa nevertheless rings better than Kurosawa's Occupation Blues. U.S. military finally relinquished control of the Japanese filmmaker's homeland in 1952; 1955's I Live in Fear is the only post-occupation Kurosawa film included here. Beginning with No Regrets for Our Youth (1946), this five-film set registers most dated at its chronological extremes, which are also the collection's most overtly postwar pieces. Fear paints Toshiro Mifune – fresh off the director's second masterpiece, Seven Samurai – into old man make-up for a plodding inversion of How I Learned to Stop Worrying and Love the Bomb. Regrets, meanwhile, shrills on Kurosawa's lone female protagonist (Setsuko Hara) martyring herself for academic freedom. Hara makes a harrowing return in 1951 Dostoyevsky adaptation The Idiot ("the destruction of a pure soul by a faithless world"), the extant 166-minute version all that's left of the original 4½-hour cut. Masayuki Mori's sad-sack Christ figure offsets Mifune's second Postwar descent into madness. That terminally darkened brow radiates pure matinee idol in Scandal, otherwise stolen by Kurosawa's other leading onscreen muse, Takashi Shimura. Mifune as a slandered painter entrusting his case to ethically solvent lawyer Shimura comes in the wake of the pair's easy chemistry in early Kurosawa greats Drunken Angel and Stray Dog. Between that double feature, 1949's The Quiet Duel stars Mifune as a World War II medic infected with syphilis and should have been a shoo-in for Postwar Kurosawa but sadly is not. The best slipcase of the grouping, 1947's One Wonderful Sunday, features neither Kurosawa standby but, rather, terminally cherubic Chieko Nakakita trying to cheer her down-on-his-luck ex-GI boyfriend, Isao Numasaki. The affecting leads' daylong journey into Japan's Postwar night – not to mention rubble – unearths Akira Kurosawa at his most romantic.

The Naked Prey (Criterion, $39.95): Before the Mayan slave traders and relentless jungle manhunt of Mel Gibson's Apocalypto came Cornel Wilde – out of Africa – 1966, stripped and pursued down to his last ounce of Darwinism. 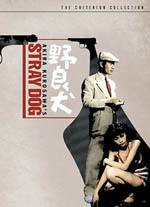 Kurosawa, Akira Kurosawa, No Regrets for Our Youth, Regrets, One Wonderful Sunday, Scandal, The Quiet Duel