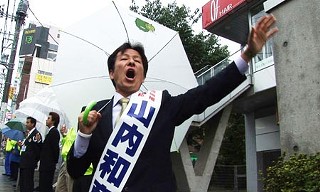 Those feeling sensory-overloaded by our own presidential campaign might feel a little better after watching how the Japanese do democracy. Kazuhiro Soda's Campaign, a hilarious film about a relatively insignificant City Council race in Kawasaki, reveals that the Japanese have a different, more in-your-face – certainly more within-your-earshot – style of electioneering than we do. The conventional wisdom propounded by Japan's highly influential and visible political consultant trade is that a candidate's name must be repeated three times a minute for it to penetrate the consciousness of the disinterested voter on the street. Hence, vans cruise sleepy residential and commercial streets, shattering the peace with campaign drivel (and the candidate's name) blaring from loudspeakers. Pushing for name recognition at other venues, candidates sporting DayGlo sashes and megaphones pound the pavement during peak rush-hour times, broadcasting content-free sound bites (and their names, of course) at times and places seemingly chosen for maximum annoyance value. The electorate, rushing for trains, avoids eye contact, impervious to all the bowing and loud-speakered best wishes for a "nice commute."

In another twist peculiar to Japanese politics, all of this mano a mano politicking will, in the end, turn out to be fairly irrelevant anyway. In Japan, apparently, the game is won by having the right party and its machine behind you. The candidate followed in Campaign, Kazuhiko "Yama-san" Yamauchi, a 40-year-old self-employed online stamp and coin trader with absolutely no political or public service experience (something he humbly discloses on the campaign trail), was plucked from the private sector by the country's ruling party, the Liberal Democratic Party, to run for a hotly contested vacant seat on the Kawasaki City Council, the loss of which would break the LDP's dominance. It's not clear why Yamauchi was picked, other than that he would be easily controlled by the LDP. Filmmaker Soda, living and making films in New York since 1993, knew candidate Yamauchi from college. When Soda learned of his friend's imminent run for office, he grabbed his camera and flew home to film the campaign. What follows is a vérité on the campaign trail with the candidate without a platform ("I'm committed to reform") or a constituency (there he is stumping for votes at a kindergarten class) or any charisma whatsoever (he's not even allowed on the same stage when the prime minister – also LDP – comes to town to endorse him).

All he has are his bossy, dismissive handlers from party central and a feminist wife who bristles at the housewife image (and script) foisted upon her by the party sensei, who obsess constantly about how best to offset the negatives presented by a candidate's wife with a career but no children despite three years of marriage. She's ordered to introduce herself as the candidate's kanai, his housewife, rather than his tsuma, his wife. The former, Soda explained to me, "is generally used by the older generations, and it literally means 'wife inside the house,' which implies that married women should stay at home." (He added: "I'm married to a Japanese woman for 10 years, but I've never used that word to introduce her. She might divorce me if I did!")

Austin Chronicle: Is it typical of Japanese politics that a chap like Yamauchi – likable enough but with no experience whatsoever – gets tapped to run for public office?

Kazuhiro Soda: I've known Yamauchi for almost 20 years. We were classmates at Tokyo University, although I never saw him in class because he never attended one! But he would show up every time we had a party –and that's the way we became friends. Yamauchi was a very enigmatic, bohemian type of guy. Since he never studied, he failed three times to move up to the next grade. And after he graduated, he made his living selling stamps and coins, which is kind of unusual for a graduate from Tokyo University, an elitist school. So, I was so surprised when I learned from our mutual friend that Yamauchi was running for office, especially with the LDP, the most conservative party in Japan. I felt it was a huge mismatch. Traditionally, the LDP candidates are homegrown. They are typically first employed by LDP politicians as secretaries or assistants, and only after many years of experience might be given a chance to succeed to their bosses' constituencies and run for election.

But recently, the LDP, which has been ruling Japan for the past 50 years almost without interruptions, has been criticized as too closed and out of touch with the needs of the general public. Their strong ties to bureaucrats and various industries have been linked to corruption. So, recently they started accepting applications to run from those outside the party. In Yamauchi's case, he was invited to apply for the candidacy by a national politician whose brother he knew. Then, Yamauchi was selected by a party committee as their official candidate. One can only guess why he was picked. So I think the fact that Yamauchi had no experience or platform was not so much of a concern for the LDP. Instead, they tried to stress the fact that he was picked from regular citizens and that the LDP is very open.

AC: Do they think that the Japanese take elections any more or less seriously than the Americans do?

KS: American and Japanese campaigns share the same goal – to get as many votes as possible to win. But how do they achieve it? That's where they become different, because the U.S. and Japan have different cultures. For example, the scene where Yamauchi says, "I am a novice. I have no experience in politics," in his speech. Americans might find that admission to be a form of political suicide, because in the American culture, candidates need to look full of self-confidence, skills, and knowledge. But in Japan, where being humble is so important, even a politician should not show too much confidence. What Yamauchi said in his speech could be acceptable, or even preferable, in the Japanese culture.

In terms of the antipathy on the street, people generally do not like election campaigns because they are noisy and often pushy. Even Yamauchi himself once said that he would never vote for candidates whose campaign cars are too loud. So I don't know how effective their campaign tactics are, but somehow, they never change.

AC: Was Yama-san pleased with the way he comes across in the film?

KS: Right before the world premiere at the Berlin International Film Festival [the film also showed at South by Southwest], Yamauchi and his wife came to New York to watch the fine cut. Obviously, Yamauchi was expecting to be depicted as a heroic figure, but when he saw the cut in my apartment, he was disappointed and upset, because he didn't look so heroic. He was also worried that some of the scenes might upset his supporters and wanted me to cut those scenes. As a filmmaker, it seemed impossible to cut them because they were some of the best scenes. I also believed that Yamauchi's character was rich and interesting because he was depicted as a person with both strengths and weaknesses, not as a perfect hero. But at the same time, I felt guilty because Yamauchi allowed me to shoot these scenes trusting me as an old friend from college. And I certainly didn't want to put him in a difficult position because of my movie. I was torn.

So, I decided to have long discussions with him, face to face. After two days, he finally agreed not to touch the cut. I was relieved and thankful. I also felt I would be responsible for whatever happened to him because of the movie's release. Those two days were the biggest challenge for me. It tested me as a filmmaker and as a person. Fortunately, when Yamauchi came to Berlin, he was greeted like a movie star. He was very popular among the audience and the press. He even became like a minor celebrity when we released the movie nationwide in Japan right before a big national election last year. And he enjoyed the spotlight. Recently, he even published a book about the experience with a major publisher.

AC: Is there a larger statement about Japanese society to be found in the way Japanese candidates campaign?

KS: To me, Campaign is kind of like an anthropological study of Japanese mentality and society. The way Yamauchi was treated by the LDP's staff and politicians is the way a newcomer is treated in many Japanese organizations, from corporations [to] schools, even on baseball teams. But I was surprised to see him being bossed around even as the candidate. Another example would be the discussion whether Yamauchi should call his spouse "wife" or "housewife." Also, the fact that she was told to quit her job to support her husband was another example of gender issues there. To me, even the way the commuter railroad staff [who, wearing gloves, hurl themselves against the train doors in order to] cram commuters into already stuffed-to-capacity trains is indicative of the Japanese mentality. It's kind of similar to the way the LDP pushes Yamauchi to win the race.

The AFS Documentary Tour presents Campaign on Wednesday, Feb. 13, 7pm, at the Alamo Drafthouse at the Ritz. Tickets are $4 for AFS members and $6 for the general public. For more information, visit www.austinfilm.org. 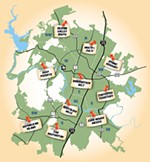