Invasion of the Tweener Pop Stars!

Setting up shop at Austin Studios for a February shoot is Walden Media's Will, a coming-of-age "dramedy" featuring both Vanessa Hudgens of High School Musical fame and Alyson Michalka of pop-singing sistahs Aly and AJ and the film version of MTV's Super Sweet 16: The Movie. According to The Hollywood Reporter, the plot is about "a high school outcast and a popular girl who form an unlikely bond through their shared love of music. They assemble a like-minded crew of misfits and form a rock group to perform in a battle of the bands competition at their school." Look for Hudgens as a 15-year-old former stutterer. Todd Graff, a longtime actor, is directing a script he wrote with Josh Cagan.

Incentives still on the way

Bob Hudgins, director of the Texas Film Commission, says Will was written with New Jersey in mind. How did it end up in Austin? My educated guess is that last year's passage of a $20 million filming incentives program helped. But not a single incentives check has been cut so far. For future trivia contests, the first project to get a Texas film incentive will be neither a film about Texans nor made by Texans. It's an episode of the BBC television mystery series Wire in the Blood, which was shot in Austin last summer. But it's not a done deal yet. "No one wants this to happen quicker than we do," Hudgins says of getting the incentives payments process moving. "I don't know what could publicly transpire to move it any more quickly than it has. I am as frustrated as anyone else." The good news? As of Jan. 9, 98 projects that were completed in 2007 have applied for an incentives grant. Of those, 65 met the requirements. Those 98 projects are estimated to have brought to Texas 12,755 jobs and more than $90 million in in-state spending, according to Texas Film Commission figures. The second project likely to receive a payment? A series of interstitials, short scenes meant to air between shows on the Disney Channel. Close to 50 of them were shot in Texas, Hudgins says, including 15 in the hallways of Del Valle High School. Hudgins believes Disney was testing the Texas incentives program for viability with its future shoots.

Richard Linklater directing a film in Europe? That's what my sources say. More details as we get them... Javier Chapa and Laura Perez's film Harvest of Redemption, which was shot on the Texas-Mexico border with a cast and crew of Austinites, is now available at Blockbuster... Look for the series of short films created through the American Trustees Project, a statewide program from the Annette Strauss Institute for Civic Participation at the University of Texas at Austin, to show up on the KLRU series Docubloggers. The UT program won a Chris Award from the Columbus International Film and Video Festival for its series of short documentaries aimed at helping young people become better citizens. Also honored was UT professor Nancy Schiesari, who directed and produced the series. 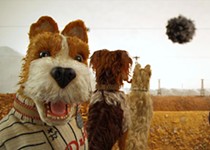