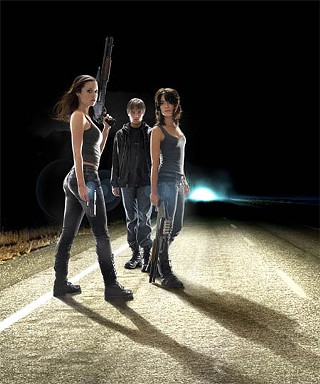 The Golden Globes were announced last Sunday on NBC in a live, hourlong event billed as the Golden Globes Winners Special. But there was nothing special about this perfunctory presentation, a last-ditch effort by the network to present something in spite of the continuing writers' strike, which put the kibosh on the typical extravaganza surrounding this annual Hollywood prom.

Ordinarily, NBC carries the gala in its entirety with pre-awards-show hoopla covered by entertainment networks on cable. But with the ongoing Writers Guild of America strike and actors vowing not to cross a picket line, the gala was pared down to a press conference featuring clips of nominated films and TV series, with stills of the winners. Yet, the WGA vowed to picket even the press conference unless NBC allowed other media outlets (TV, print, and radio) to cover the big reveal, as well. So the show may have been more interesting on cable, but NBC is where the majority of the viewing public would have seen the event.

You'd think that Access Hollywood hosts Billy Bush and Nancy O'Dell would be up to the task of bringing a little brio to the event. The show must go on and all that, right? Not exactly. The pair was as dry and stiff as stale bread. Standing awkwardly side by side behind a podium made it difficult for the pair to offer responses to the announced winners, as they felt it necessary to address each other as opposed to the large audience that was presumably watching at home (no ratings numbers were available at press time). Bush's goofy and distracting necktie and O'Dell's plastic smile and spray-on tan only added to the weirdness of what could have been a good save of an otherwise lost event.

Faring better were Access Hollywood correspondent Shaun Robinson and Dave Karger, senior writer from Entertainment Weekly, who appeared periodically to offer responses and predictions. The pair appeared to have a natural rapport, helped by Karger's obvious ease with off-the-cuff commentary and a more comfortable setting (seated, facing each other). While Karger was the most watchable among the assembled talking heads, it was surprising to see a writer of any stripe appear at the presentation. So much for solidarity.

Personally, I can do without the red-carpet festivities and the related close-up look at all the trappings that go into producing a gala. But this glum Globes presentation was only a short step above scrolling the names of nominees and winners across the screen.

With or without the hoopla, I was happy to see that many of my favorites were tapped: Glenn Close, Damages (FX); Tina Fey, 30 Rock (NBC); and Jon Hamm, Mad Men (AMC), all won best-actor nods in their respective categories. While I was rooting for 30 Rock to take the trophy for best comedy, Extras (HBO) was the deserving recipient, as was Mad Men for the best-drama category.

Fortunately, the Golden Globes Winners Special wasn't the only thing to watch. Sunday also marked the premiere of the long-awaited Terminator: The Sarah Connor Chronicles on Fox. This new series, based on the Terminator film franchise, stars Lena Headey as Sarah Connor and Thomas Dekker as Connor's teenage son, John, and the amazing Summer Glau (Firefly) as Cameron, sent from the future to protect the Connors from a future generation of robots bent on destroying mankind.

The series picks up where the film Terminator 2: Judgment Day left off. Sarah and her son are on the run. Sarah's lover – a time-traveling resistance fighter battling Skynet, the organization that created the artificial-intelligence devices that turned on their human creators – is long dead. His heir is John, Sarah's only son and the potential savior of mankind ... if only he can make it through high school.

Sent from the future to help them stay alive is Cameron, another robot, who is relentless in her mission to protect the Connors. The three of them pose as a typical, single-parent family, but when an assassin robot (i.e., the Terminator) inevitably shows up to wreak havoc, they all whip out their formidable cans of whup-ass to produce heart-pounding action sequences that make similar series featuring fugitives on the run (Prison Break) or a race against villains (24) look like cooking shows. In fact, those going through 24 withdrawal (the new season is in the vault pending the conclusion of the writers' strike) will forget to grouse when they tune in to this stylish sci-fi thriller. 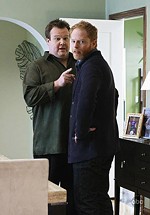 TV Eye
The Season for Nominating