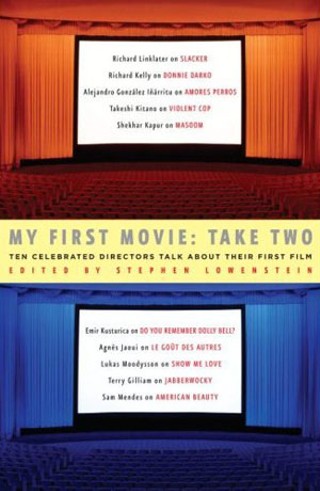 
At the heart of all great art lies obsession, and at the heart of all great love lies the same; the impulse to create and the instinct to fornicate are two heads of the same all-consuming beast, a beast that can lift a man to greatness or reduce him to ashes. Two new books, Stephen Lowenstein's My First Movie: Take Two and Cinema of Obsession by Dominique Mainon and James Ursini, set out to explore the age-old connection between art and fixation. Though Lowenstein's book may sound like the less sexy of the two, with its tales of wide-eyed young filmmakers struggling to get their visions on film and then angling for success, it's actually the one with the best chance of raising readers' temperatures. Cinema of Obsession, on the other hand, though it claims to be about "erotic fixation and love gone wrong in the movies," barely even manages to simmer.

Take Two is the sequel to Lowenstein's 2002 book, My First Movie, a collection of interviews with now-successful directors discussing their first feature films. That book featured conversations with Hollywood luminaries such as Oliver Stone, independent giants like the Coen brothers, and foreign-language favorites like Pedro Almodóvar. Volume two keeps with the winning formula and includes interviews with Richard Linklater (Slacker) and early-Aughties prodigy Richard Kelly (Donnie Darko) along with lesser-known foreign directors like Agnès Jaoui (The Taste of Others) and Swede Lukas Moodysson (Show Me Love).

Though Lowenstein's interviewees are all the products of different countries, cultures, and experiences, their concerns are remarkably similar: the relationship between artistic freedom and financial independence ("I pay to be free," says Amores Perros director Alejandro González Iñárritu), the struggle to maintain individual vision in the face of outside influence, and the value of obsession as the only real means of getting through the long months of shooting, the constant skepticism both from without and within, and the potential indifference of the marketplace that conspire to keep first-time filmmakers cynical. Like Orpheus hunting for Eurydice, Lowenstein's filmmakers were all willing to descend into hell in order to get their hands on what they desired most, both the hell of their own fixations and the hell that is the movie business; unlike him, of course, they all came back triumphant. As Linklater says, "[Making Slacker] was a most intense time in my life. I just remember every waking second and sleeping moment, it was all about the film. ... I realized there was nothing else I'd rather be doing."

That intensity is missing from Cinema of Obsession, which is odd considering the point of the book is to shine a light into the sexiest corners of film history and extol the narrative power of erotic preoccupation. Where Lowenstein is able to make a wonkish subject like the ins and outs of filmmaking seem passionate and exciting, Mainon and Ursini have managed to take volumes of deliciously taboo subjects – forbidden love, voyeurism, sex and violence, etc. – and turn them into an excuse for academic posturing. They may write about some of the raciest movies ever made – Last Tango in Paris, The Blue Angel, La Dolce Vita, et al. – but the result is the journalistic equivalent of a cold shower: Their prose has the distant, anthropological tone of the academic journal, and their goal seems less to revel in the thrilling multiplicity of cinematic sexuality than to simply point it out. With its 300 pages of dry plot summaries and artless description, Cinema of Obsession turns out to be no more provocative than the Blockbuster Entertainment Guide to Movies.