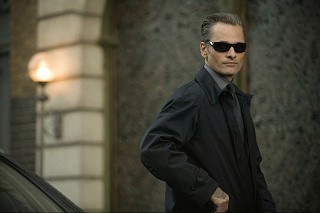 1) The Lives of Others Florian Henckel von Donnersmarck's tale of repression and redemption in communist East Germany is as brilliant a directorial debut as anyone not named Orson Welles could hope for.

2) The Bourne Ultimatum Director Paul Greengrass spins adrenaline into art and comes up with the best action movie since Raiders of the Lost Ark.

3) Eastern Promises This unflinching look inside the Russian mafia is one of the oddest, most energizing films I've seen in years.

4) No Country for Old Men The Coen brothers return to form with this elliptical, agnostic trip into America's violent heart.

5) The Diving Bell and the Butterfly Can there be anything more inspiring than a movie about a stroke victim who creates an entire world inside his head? Or more humbling?

6) The Wind That Shakes the Barley Populist agit-prop at its finest, shot with a sense of ethical urgency by cinema's great humanist, Ken Loach.

7) Juno This film's unbearably clever first 30 minutes had me looking for a rafter to hang myself from. The next hour had me believing in something.

8) Things We Lost in the Fire As a junkie coming to the aid of his dead friend's family, Benicio del Toro carves his face onto the Mount Rushmore of great film actors.

9) Michael Clayton Paranoia filmmaking the way it should be done. A throwback to the glory days of All the President's Men and The Parallax View.

NEAR MISSES: The Assassination of Jesse James by the Coward Robert Ford; The Hoax; Sicko; Lust, Caution

MOST OVERRATED: Knocked Up, Gone Baby Gone, This Is England

MOST UNDERRATED: The Hoax, Things We Lost in the Fire, After the Wedding

ACTING KUDOS (MALE): Benicio del Toro (Things We Lost in the Fire), Ulrich Mühe (The Lives of Others), Tommy Lee Jones (No Country for Old Men)

ACTING KUDOS (FEMALE): Ellen Page (Juno), Halle Berry (Things We Lost in the Fire), Martina Gedeck (The Lives of Others)

BEST SCREENPLAY (ADAPTED): No Country for Old Men (Ethan and Joel Coen), Away From Her (Sarah Polley), The Hoax (William Wheeler)

BEST REVIVAL: Army of Shadows: 30 years after its original release, Melville's semiautobiographical classic about the French Resistance gets the Criterion treatment it deserves.

WILD CARD: The Strongest-Argument-for-a-Best-Cameo-Academy-Award Award: In I Am Legend, Emma Thompson creates more magic in two minutes of screen time than most actors manage in two hours.