Tweet
print
write a letter
If there's a common theme in this year's Top 10 TV, it's strong ensemble casts and vivid writing (go, writers!). Some of the most respected are among the least viewed, which only goes to show that just when you've given up on TV, something appears to renew your faith. That was especially evident this year with some of the most well-written works coming out in droves on the small screen. With that, here's the list: 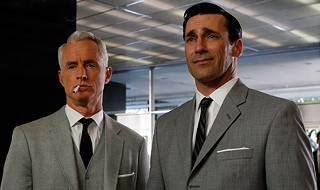 1) Mad Men (AMC) I was mesmerized with this series from the beginning but confess to being slow to appreciate it, even though I tuned in week after week. Now, after watching the first season in its entirety, I believe this glorious drama is much more than a stylish period piece about the advertising business. It's a meditation on the present, offering the nagging but unasked question: Who are the people we say we are?

2) 30 Rock (NBC) So few TV comedies can make you laugh out loud, but this bright comedy manages to find unexpected laughs in the most outrageous moments. This year's jaw-dropping moment was Alec Baldwin as Jack Donaghy channeling Redd Foxx during Tracy Jordan's (Tracy Morgan) therapy session. Last year, it was Paul Reubens guest-starring as a member of an obscure royal family, the product of years of inbreeding (two words: ceramic hand). That was topped only by Jack and his ex (Isabella Rossellini) fighting over their Arby's franchise ("Damn you, Jack; you know how I love my big Beef 'n Cheddar"). Which gives 30 Rock the unexpected prize for the most obvious yet most entertaining use of product placement.

3) Damages (FX) Another superb cast, this one in a taut legal thriller starring Glenn Close. Ted Danson was marvelous as the soulless corporate tycoon, Arthur Frobisher, but the transformation of Ellen Parsons (Rose Byrne) from a reserved first-year lawyer into a calculating creature bent on revenge was hair-raising.

4) The Riches (FX) The premise of this underappreciated series sounds preposterous: After accidentally running an affluent couple off the road, a family of professional drifters assumes the identities of the couple, bluffing their way into jobs, prestigious schools, and friendships. How they manage to keep up the hoax is what kept its woefully small audience watching. But its observation of class and the classic American reinvention tale is what makes this series much more than a fish-out-of-water story.

5) The Office (NBC) A great ensemble cast led by Steve Carell makes the dullest 9-to-5 job on earth worth revisiting, week after week.

6) Dirty Sexy Money (NBC) Ah, the self-absorbed and spoiled Darling family. How I love them. Just be happy you don't work for them. The allure and repulsion of excess is what drives Nick George (Peter Krause) to continue to work for the Darlings, along with his need to get to the bottom of his father's mysterious murder. The murder-mystery is a disposable device. It's the Darling family antics (superbly led by Donald Sutherland and Jill Clayburgh) that make this series especially delicious.

7) Flight of the Conchords (HBO) Quirky with a capital "Q." The series about two clueless Kiwis trying to make it as musicians in New York is delightfully absurd. This is what HBO should have focused their attention on promoting instead of that wearisome John From Cincinnati. Songs with off-the-wall lyrics presented as low-rent music videos are simply delightful. Flight may be an acquired taste, but it's one well worth cultivating.

8) Extras (HBO) I'm a sucker for behind-the-footlights projects, and this is one of my favorites. Another series from the brilliant Ricky Gervais and Stephen Merchant ended this year, but the laughs endure. And only this team could pull off a two-hour series finale with just enough bite to remind us that stardom isn't everything.

9) Aliens in America (CW) Another overlooked gem, this series about a Muslim Pakistani foreign-exchange student living in Wisconsin (Adhir Kalyan as Raja) packs a larger punch than might be expected from a typical based-in-the-suburbs sitcom. While effortlessly lobbing barbed commentaries on U.S. isolationism, it still managed to be warmhearted without being too mushy, condescending, or dependent on the cheap laugh.

10) Friday Night Lights (NBC) I don't think you're allowed to live in Texas without showing some love to this struggling but still solid drama about the lives and loves of a small Texas town driven by football.