Ready for a thick slice of post-Christmas celeb gossip, Texas-style? As we told you way back in September, Terrence Malick is planning a spring shoot hereabouts of Tree of Life, his long-gestating project with Sean Penn in the cast. What we didn't tell you is Brad Pitt, according to Variety, is in talks to replace Heath Ledger. Meanwhile, John Travolta is no longer attached to the big-screen version of TV's Dallas, which may or may not shoot in Big D. It gets weirder. New York Post's "Page Six" column says the film, years in the planning, is now going from drama to kitschy comedy. And in East Texas, Denzel Washington left a $1 million tip after a premiere screening of his The Great Debaters at Marshall's Wiley College, which was the real-life backdrop for the debate team featured in the movie. Washington's bucks will go to revive the school's debate team.

Remake it, and they will come

The Alamo Drafthouse's latest side project is aimed at you, the goofy wannabe filmmaker. It's FilmmakingFrenzy.com, a website devoted to the wackiest filmmaking contests the Alamo can conjure. First up is Rewind Kindly, inspired by the Michel Gondry's film Be Kind Rewind, which opens Jan. 25 and features Jack Black as a guy who accidentally erases every movie at a local video store and attempts to reconstruct them by acting them out. In that vein, contest teams will have until Jan. 18 to complete an up-to-five-minute, homemade, low-budget remake of a popular Hollywood film. I'm envisioning either Being There with Chance the gardener strolling down South Congress or perhaps Fargo done with Claymation, but a Star Wars remake is a safer bet. Entries will screen at the Alamo.

Count director Richard Linklater, actor Luke Wilson, and Zadi Diaz, creator of the Web series EPIC-FU, among judges for the Greenlight Awards honoring the best online episodic series. The awards are sponsored by ON Networks and South by Southwest Film. More at www.onnetworks.com/contest/register/greenlight... Alina Fernández Revuelta, daughter of Cuban leader Fidel Castro, has signed a deal with Austin-based Artists Relations Group to tell her life story on the big screen... Villa Muse Studios is taking a step toward its planned 2008 groundbreaking with the hiring of Barry Bongiovi to manage the recording complex and Ed Evans as technical director. The plan is for a production and postproduction facility for film, television, game development, animation, advertising, video, and restoration... Disney Channel fans may not know that As the Bell Rings, a series of two- to five-minute sitcom shorts set outside a principal's office and airing on the network, was shot at Del Valle High School... Visual effects pro Eric Pham of Austin has optioned a script titled Kid Spaghetti with plans to produce, according to InkTip.com... Reel Women has its First Monday Mix schmooze fest from 6 to 8pm, Jan. 7, at Opal Divine's upstairs balcony Downtown... Go ahead. Wish me a happy birthday today. It's what all the cool kids are doing. 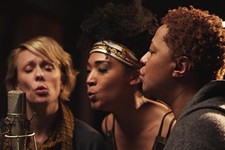