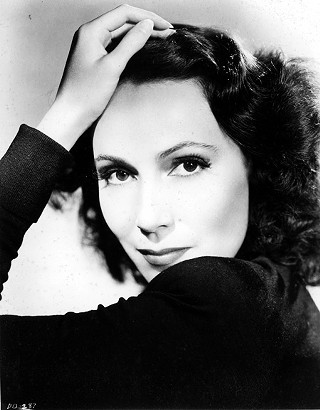 Long before there were Salma, J.Lo, and Adriana, there were Dolores, Lupe, and Katy. Okay, maybe J.Lo, with her up-and-down acting career, doesn't quite fit in there, and for those who've already forgotten, Adriana Barraza is the Oscar-nominated Mexican actress who starred in Babel. But if you're a student of Mexican cinema, the last three women need no last name (for the record, it's del Río, Vélez, and Jurado). Their work is the theme of the next Essential Cinema series hosted by the Austin Film Society, starting Jan. 8. While it seems a shame to limit the roster to these three actresses, there's a reason: They are the three most visible Mexican actresses who built successful careers in Mexico and in Hollywood, navigating cultures, challenging stereotypes, and becoming icons on both sides of the border.

Interestingly, del Río and Vélez launched their careers in U.S. silent films. Del Río eventually spent most of her time making Mexican films. Jurado successfully split her time in both countries, while Vélez only made two Mexican films, later working around the world as well as in Hollywood. While del Río and Jurado had long careers, Vélez's early death (by suicide) abbreviated her career. So it's a treat to see Vélez's first feature film in the series, 1927's The Gaucho, starring the legendary Douglas Fairbanks. It's almost impossible to take your eyes off the charming and agile Fairbanks (here, playing a wily leader of a band of bandits), but Vélez absolutely sparkles, matching him, frame for frame, with her own commanding screen presence. The first of Vélez's two Mexican films, 1938's La Zandunga, is also featured. In this, she stars as a beautiful young woman torn between tradition and love. Most of the film focuses on the antics of Vélez's male suitors and the village power brokers, as the women flutter and gossip. Yet, the film's gaze at the Tehuantepecan regional dress, music, and architecture is lovely, without being too pastoral or, as is most often the case, broad and gaudy. The same could be said of Roberto Gavaldón's Deseada, which stars del Río. In this film, the luminous del Río plays a woman preparing her sister for an arranged marriage but ends up falling in love with the handsome fiancé. Gavaldón delights in filling the screen with del Río's expressive face. The only thing that matches del Río's presence is the majestic Chichén Itzá vistas that serve as the film's backdrop.

The most recently deceased of the three featured actresses in the series is the divine Jurado. Among Mexican-American women of a certain age, Jurado's Golden Globe Award-winning performance as Helen Ramírez in High Noon (1952) is legendary. Her iron backbone is what makes her fans go, "Oh, snap," but it's her heartbreaking vulnerability that makes her embraceable.

Class, race, and gender matters permeate the narratives of several of the six films in the series, but it's the actresses who command the attention. Often pigeonholed to types – Vélez as the "Mexican spitfire," del Río as the dignified "good woman," and Jurado as the sexually charged "hot Latina" – the three always brought just enough variation and nuance to make audiences question their assumptions. After all these years, del Río, Vélez, and Jurado still delight.

All films screen 7pm on Tuesdays at the Alamo Drafthouse at the Ritz. Screenings are free for AFS members and $4 for nonmembers. For more information, visit www.austinfilm.org.