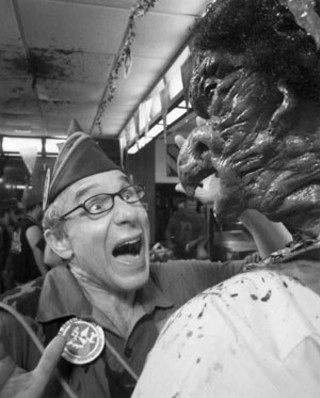 Just when you thought it was safe to go back to the old Indian burial ground, legendary slapstick-gore director and Troma studios founder Lloyd Kaufman, the twisted mind behind The Toxic Avenger, Sgt. Kabukiman N.Y.P.D., and nearly 30 other films, is back with Poultrygeist: Night of the Chicken Dead, a film guaranteed to stimulate your mind, warm your heart, and make you sick to your stomach.

This Friday night, the Alamo Drafthouse Lake Creek will be premiering Kaufman's latest opus, a loving tribute to zombie movies and a satire of the American fast-food industry in all its nefarious, moneygrubbing glory. No one gets away clean in Poultrygeist, not "devil-worshipping conglomerates," not morbidly obese fast-food addicts, not animal-hugging environmental activists, not Jews, not Muslims, not children, not even topless lesbians. Everyone is grist for Kaufman's gruesome mill, and no one is above getting splattered with blood while having their intestines ripped out by erotically charged, Indian-spirit-cursed chickens out to exact their revenge on our culture of mass consumption and self-indulgence.

Recently Kaufman spoke with me from his office in New York City, where a run-in with an iconic fast-food chain provided the inspiration for what he calls the "cinema's first chicken-zombie horror comedy ... with musical numbers!" For more than an hour, we talked about his battles with oversized rats, the importance of staying independent in a corporate world, and why he's a better filmmaker than the Coen brothers.

Austin Chronicle: How did you get the idea for Poultrygeist? Did the story come first or was it the name?

Lloyd Kaufman: Most of the movies I've made come from a theme that's in the political or sociological realm. McDonald's recently moved in next door to the Troma building in New York City, and they started dumping their garbage in front of our building illegally. Soon thereafter, we had a major invasion of rats in the basement of our building – rats the size of raccoons – and it got so bad that nobody would go down there. And I had to go down there and not only fight off the rats but clean up all the shit. And it was just horrendous. We keep 30 years of Troma history in that basement – old posters, records, clippings – and the rats were spending their weekends down there.

Anyway, we had a fairly new employee who was an editor, and he had previously worked in fast food. (Of course, working for Trauma was a step down in his career.) So he suggested the fast-food theme ought to be something to build a Troma movie around. I had read Eric Schlosser's book Fast Food Nation, and I thought it was great. So I started researching the fast-food industry and began realizing in more vivid detail just how nefarious it is. That was where the germ for the idea for Poultrygeist came from. Or it could have just been the hantavirus I caught from cleaning up all that rat shit. I'm not sure. [Laughs.]

Anyway, I'd never made a zombie movie, and what better metaphor is there for the fast-food industry? The media puts the Kool-Aid in the water, and the public and the children, like zombies, go to Burger King so they can get their little Transformer toy or their two burgers for the price of one. Americans love to eat shit when the media tells them to.

AC: Do you think you got your satirical message across?

LK: Obviously I'm slightly prejudiced, but I think on every level, Poultrygeist is a very profound movie, and I would suggest with all sincerity that if Paramount Vantage were distributing Poultrygeist and Troma were distributing No Country for Old Men, the critics would be singing the praises of Poultrygeist. The character development, the subtext, the texture, the entertainment value, everything about Poultrygeist is so much more profound, entertaining, and sophisticated than No Country for Old Men, which is a good movie, don't get me wrong. But the violence in that movie made no sense. At least in Poultrygeist, the victims – the exterminated Indians and the billions of exterminated chickens who live in concentration coops for their short, tortured lives – are getting revenge. When they're ripping off somebody's balls and french-frying them, it makes sense, and it makes a political statement. I believe Poultrygeist is a first-rate social satire and a first-rate zombie movie. Unfortunately we live in an age of media consolidation whereby the movies you hear about are the ones distributed by the giant international conglomerates, while those of us who are truly independent are not given too much attention.

AC: Are you independent by ideology or just by necessity? What if one of the major studios were to come to you and say, "Lloyd Kaufman, here's $100 million; make us a movie"?

LK: I made a choice a long time ago to be an independent director. We started Troma in 1974, and the whole idea behind it is that it's important for filmmakers to have total control. And I've been lucky; I've had 40 years of making films with total freedom. The only downside is we get no money and no appreciation.

I've never been part of the mainstream. And the one or two times I've been able to penetrate the hymen of the mainstream, I'm the one who got fucked. [Laughs.] So it would take an awful lot of money to corrupt me.

As for the $100 million, I would take $1 million and make two movies, and then the rest I would give to other filmmakers. How great would that be? Instead of one Dante's Peak, which cost $200 million, imagine instead if they had given $500,000 to 400 different filmmakers. How many wonderful movies would they have gotten? And they would have made a shitload of money, and they would have been heroes all over the world. Instead they spent $200 million on Dante's Peak, a volcano movie that has no lava in it. [Laughs.]

But I should say that I've never had the opportunity to be tempted. Satan hasn't come to me with any lucrative offers to remake Transformers. Not yet anyway. 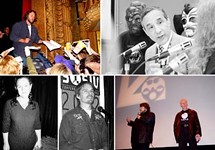 The Long Goodbye: SXSW Film
Snapshots from the fest 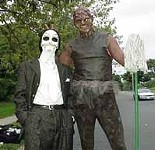