A Second Shot at 'Shootin' Match' 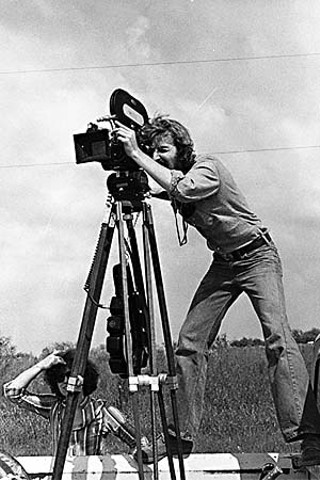 Certainly this publication has not been shy about trumpeting the discovery of a mint print of Eagle Pennell's 1978 independent regional feature, The Whole Shootin' Match. This is not just because the film is a wonderful regional comedy or because it's historically important but because, until this print was discovered in Germany, there has been no decent screening-worthy print available in any format. The film is worth viewing because it is so well-written and -realized, but finding it also restores a missing piece of post-Sundance film history.

The Whole Shootin' Match is having a theatrical run at the Alamo with a DVD release to follow. Accompanying that will be a new documentary on the filmmaker, the creative but hard-living Eagle Pennell. In it, Richard Linklater talks about how seeing the film for the first time made him realize that he could make movies. Linklater was not alone in this realization. The success of TWSM, followed by the release of Return of the Secacus 7 two years later, helped ignite the extraordinary growth in independent film (as Linklater's Slacker did a decade later). TWSM's influence was not limited to just inspiring filmmakers. It affected a lot of people. In the documentary, writer and ex-Austinite Paul Cullum talks about how Robert Redford watched the film at the Egyptian Theater in Park City the first year of the U.S. (or USA) Film Festival. Watching TWSM inspired Redford to think about how to support independent films and filmmakers. Redford had nothing to do with the festival when he saw the film, but over time he became more involved until it was very much his festival, Sundance.

There are dozens of outrageous stories about Eagle, most having to do with alcohol and resulting escapades. Unfortunately, Pennell's personal weaknesses cut short the most creative period of his filmmaking. Almost as unfortunately, the myth has come to swamp the wonder and importance of his first two feature films, The Whole Shootin' Match and Last Night at the Alamo. The films are unique in the way they are so clearly made in, about, and of Texas. There is an authenticity to the characters, their lifestyles, and the pace of life that almost all Texas films made by Hollywood completely miss. The loose, easy narratives match this depiction, further enriching them.

If the two films stood alone just as cinematic narrative works, they would be deserving of praise and interest. Given the enormous influence they've had, there is a greater importance to them. Pennell's quite unintentional influence on several generations of independent films and filmmakers shouldn't be underestimated.

The Whole Shootin' Match stars Lou Perryman and Sonny Carl Davis, interviewed below. It's the story of two losers, two dreamers who never give up. Failed scheme follows failed scheme; the film suggests, however, that not getting there can be most of the fun. Austin acting legend Doris Hargrave also stars. The terrific script, by Pennell and Lin Sutherland, is loaded with great dialogue (Sutherland also was co-producer).

I've introduced screenings of TWSM a couple of times now. Regrettably, I've gotten way too wrapped up in trying to explain the importance of the film, hoping to convey its significance and its place in contemporary film history. Eagle would have both laughed at me and been pissed off. He would have been right. I ended up missing the forest for the trees and misleading audiences into expecting a Citizen Kane/Breathless type revelation. Instead the point is how much the film conveys a time (late Seventies) and place (the Hill Country). It is about how the characters are so richly depicted and so far from typical Texas stereotyping, with a pace that is Texas-storytelling-appropriate, carefully constructed and certainly in not too much of a hurry to get anywhere. Sure TWSM is important and influential, but forget that: The talent of Pennell, the cast, and crew resulted in a film that is a very entertaining slice-of-life tale of just plain folks so rarely portrayed honestly in movies, living, dreaming, scheming, and loving.

"What Hath Eagle Wrought?"
After the smoke cleared, 'The Whole Shootin' Match' helped give rise to the contemporary indie 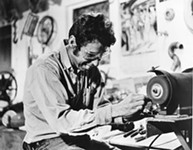 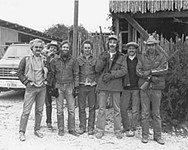