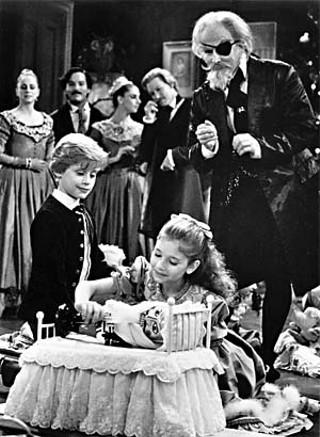 Viewers can vote on their favorite Nutcracker adaptation – including this one, staring future-Party Monster Macaulay Culkin – at OvationTV.com.

I forgot what it was like to be around people on the holidays. After several years of happily going solo, taking in both Thanksgiving and Christmas as a personal retreat, I had forgotten about the finer points of stuffing chauvinism (cornbread vs. sage, whether to call it "stuffing" or "dressing"). I forgot about how snooty otherwise merry folk can be about cranberry sauce and the reaction to those who admit to loving the canned, jellified version. And don't get me started on vegetables. Some people sneer at the mere suggestion of adding something green to the table. Others prefer their vegetables canned and drowned in whatever processed goop they can find, topping it off with something that can only be described as "crunchy." Fortunately, the group I found myself among not only had greens on the table, but two different kinds – spicy and mild. And there was not a pop-and-serve dinner roll in sight. Just as well. There were at least three kinds of bread stuffings on the table I found myself at.

Yes, this is the season not only for food, friends, and good cheer but for holiday traditions like A Christmas Carol and, as Ovation TV reminds us, The Nutcracker. While I have had worse Thanksgiving meals (the year of the canned turkey is a stand out) and been in my share of abysmal holiday productions, I have never been in a performance of The Nutcracker. Fortunately, Ovation TV has sifted out the chaff to offer up four versions of The Nutcracker that viewers can watch throughout the month and then vote on the best. Not to worry if you miss any of them. A marathon of the said Nutcrackers will air on Christmas Day.

Performances begin with Matthew Bourne's Nutcracker! (2003) Dec. 2 at 7pm. The Bolshoi Ballet production (1989) airs on Dec. 3. The Hard Nut (1991) airs Dec. 4, and the 1993 theatrical film George Balanchine's The Nutcracker, staged by Peter Martins (with Macaulay Culkin as the Nutcracker), airs Dec. 5. The various Nutcrackers repeat Dec. 11-14 and again Dec. 16-19. Check local listings for air times. (I would have liked the jazz adaptation of The Nutcracker by Duke Ellington included. It evidently aired on Ovation in October, but like holiday wishes, they don't all come true.)

Viewers can vote for their favorite version of The Nutcracker through Dec. 19 at www.ovationtv.com.

What else is on?

An excerpt from local filmmaker C.C. Stinson's documentary, Light, Bright, Damn Near White, airs on Docubloggers on KLRU at 7:30pm, Thursday, Nov. 29. The doc looks at "colorism," a form of interracial discrimination based on skin tone.

A special two-hour "holiday" version of The Closer airs Dec. 3 at 7pm. Brenda (Kyra Sedgwick) and her man travel to Atlanta to retrieve a suspect and spend Christmas with her parents. Think: winter wonderland on crack. A new season of Saving Grace (starring Holly Hunter) follows at 9pm, both on TNT.

Host James Lipton chats it up with John Cusack on Inside the Actor's Studio, Dec. 3 at 7pm on Bravo.

Tyler Perry's House of Payne returns for a second season Wednesday, Dec. 5, at 8pm on TBS.

Not to be missed: While Pu-239 is not particularly cheery, it is superb. Based on the short story by Ken Kalfus, the film is named for the weapons-grade plutonium that draws two disparate (and desperate) men together, united by their shared desire to support their families in the "new Russia." Making his directorial debut, Scott Z. Burns has assembled a spectacular cast – Paddy Considine (The Bourne Ultimatum, In America) and Radha Mitchell (High Art, Melinda and Melinda). Pu-239 airs tomorrow night (Friday, Dec. 7) at 6pm on HBO with additional screenings though Dec. 31. Check local listings.