The End of the World as He Knows It

Richard Kelly does decadence plus dystopia in 'Southland Tales'

"The future is just like you imagined," goes a tagline for Southland Tales, especially if you imagined it in a Ritalin haze, channel-surfing premium cable during some wasted summer in the late Eighties. It's an apt sentiment for our embarrassing times, as we slouch toward another presidential election in which the only candidate who gets to skip the Iowa caucus is 9/11 itself, an event that too closely resembled for anyone's comfort our post-Reagan blockbuster fantasies of how the world would end. Maybe the future is just like we imagined, and maybe it's better to keep jabbing at the remote, because thinking too deeply on any of it really creeps us out.

So we've got a movie where there's an action hero (played by Dwayne "the Rock" Johnson) and a porn star (Sarah Michelle Gellar) who have concocted an apocalyptically prophetic screenplay that's coveted by neo-Marxist revolutionaries, who plan to hijack the 2008 presidential election with slam poetry and severed thumbs, as the U.S. government has another terrorism-inspired fascist freak-out. Meanwhile, there's an ocean-based alternative energy source slowing the rotation of the Earth and opening rifts in the time-space continuum. It all gets narrated from atop an arcade by an Iraq war-scarred Justin Timberlake, who can't resist stopping everything for an ecstatically mournful music video. Plus poop jokes, two Seann William Scotts, and lots and lots of celebrity cameos.

Is this a dream or a nightmare of a second feature for Richard Kelly, the writer/director of 2001 cult hit Donnie Darko? Critics at Cannes in 2006 were so loudly dismayed as to make it both, so now it's been trimmed, if not tamed, and multiplex audiences can share the confusion (although Kelly has shaved a half-hour off the original cut). Kicking off the film with a nuclear attack on Abilene, Texas, a target rationalized only by resort to authorial biography (Kelly has family there, and the scene was shot at his aunt's house), the director signals instantly that at its best and worst, this will be a deeply personal piece of work. But not the kind of "personal" that leads to tearful acceptance speeches; Southland Tales is personal in an obsessive, intricate, and utterly careless mode, more common to Book of Revelations-inspired murals made from bottle caps than to star-studded Indiewood product. It doesn't so much raise more questions than it answers as it suggests the feeling of far more questions than it can raise, without knowing remotely whether that's a good thing or bad. So it was no small challenge to articulate my own questions when I discussed the film with Kelly by phone.

Austin Chronicle: There's a really serious Eighties retro-future thing going on in the film. Aside from nostalgia, what's behind that for you?

Richard Kelly: Well, I guess when you mention the Eighties, [you mean] Chris Lambert and Curtis Armstrong and Zelda Rubinstein and those actors [in the cast], but I felt as though this was a film about a lot of dark, dark subject matter, troubling subject matter. It's about politics and religion and pop culture, and I felt as though I wanted it to be a really fun party, where you invite some really fun faces, from the past and from the present and hopefully from the future. ... It felt right to me to include all these people and try to make it as fun as possible.

AC: But why should you make it fun?

AC: So was I correct spotting [Hostel director] Eli Roth getting shot while he's on the toilet? I mean, it seems like even the smallest cameos here get loaded with meaning.

RK: Yeah, good old Eli. But yeah, absolutely. With my crew, every little detail became significant. We realized we were creating a big puzzle, and we kind of had fun with the details to try to give audiences something that could be studied or deconstructed over multiple viewings.

AC: Right, and T.S. Eliot, Robert Frost, the Book of Revelation, and Perry Farrell get treated as poetic equals. It makes it like watching a movie made from some big, crazy, satirical epic that that really cynical, hyperactive kid was always writing in the back of English class, junior year of high school.

RK: You know I feel like I've been that kid for a while now. ... There's still a childlike quality to the voice behind this film, in a way, and it has a lot to do with ... this post-9/11 childlike anxiety that everyone has inside of them. And a response to that anxiety is what this film is, in a way. In terms of the references, there are many references obviously to Kiss Me Deadly and to film noir. It's a collage in a sense.

AC: And then you've got multiple Christ figures in the film. And one of them is played by the Rock.

RK: That's the world I grew up in. And I guess I've always considered myself agnostic, but I've always been fascinated by Christianity and trying not to be; even though I don't subscribe to it, I try to be open-minded to it. Try not to be dismissive completely, because there's obviously something there that's making the world go 'round or maybe making the world self-destruct at the same time. I certainly felt that in making a movie about the end of the world, we'd be dealing with all religions, and in the movie, Dwayne Johnson actually has tattooed on his body symbols of a whole bunch of different religions. And it's sort of a joke that the religion that wins the contest is the one that bleeds.

AC: We keep coming back to some pretty hefty politics, but for me, it's tough to say what I can take away from the film politically.

RK: For me, I guess where I'm coming from, I'm obviously the angry liberal ... and I kind of wanted to make fun of myself first and foremost, with like the neo-Marxists as a liberal extremist group, and I kind of see that as what could be me. I could easily be [like them]. I mean, I used to live in Venice Beach, like those characters. And so I was trying to be evenhanded in that sense of where I'm coming from, engaging in a kind of satire about the extreme right and the extreme left to be forthcoming in my admission of my own sort of angry limousine-liberal stance.

And it's in this world where everyone is watching, everyone's recorded, and it all kind of has to do with the Internet being sort of like the Old West. It has yet to be tamed. It can't be tamed. And if the government steps in and tries to tame it, there's going to be an instant rebellion against that. Just craziness.

AC: Right, but then when you're invoking Marx, I think maybe more approvingly than not, it's conflicted. I mean, isn't the film itself, with all its effects and stars and budget, the kind of decadent product that Marx would critique?

RK: Absolutely. I mean, I kept coming to that quote in the movie, "Destroy capitalism and dethrone God," this kind of grandiose philosophical statement that's taken literally and exposed literally in the film. And there is a decadence and an indulgence in the film absolutely that is in the nature of what we were doing. ... It's a film where I was sort of swinging for the fences, trying to cover all this territory. Like if it's about the end of the world, you want it to go out with a bang. I guess I made the film as though it might be my last.

AC: And after Cannes there were some who thought it might ...

RK: You always have that fear as a filmmaker: "Oh, I'll never get to do this again." It felt like this window of time in my life where I could do something big and bold and political and get it out of my system before it was too late, before I lost my nerve, or the window of opportunity had disappeared. But listen, I'm the first one to raise my hand and plead guilty to the accusation of self-indulgence. But we tried to make the roller-coaster ride as tight as possible and just try not to overstay our welcome. 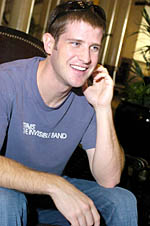 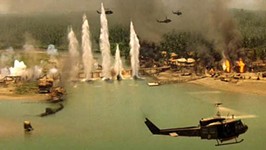