Thom Andersen sets the story straight on the city he loves 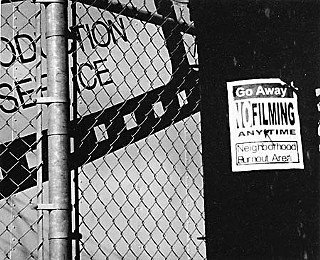 Thom Andersen's film kicks off with a rousing big-band sound, hyping a sumptuous panorama of the city of Los Angeles at night, lights twinkling across its huge urban sprawl. Cut to a thrilling full-frontal shot of the vintage chrome of a Barbara Stanwyck-worthy limo as it makes its way past the glitzy marquees of the burlesque houses, which line both sides of the street. Suddenly a gunshot and Sugar Torch, the distraught, half-dressed stripper in Sam Fuller's The Crimson Kimono (1959), bursts from her dressing room running down the street before flinging herself into oncoming traffic. Taking the bait, we settle in, suspending our disbelief along with our cell-phone ringers, and prepare to be swept away for a few "Hooray for Hollywood" hours, fully expecting Los Angeles Plays Itself will be something along the lines of a That's Entertainment!

Or maybe not. Enter the narrator – a gruff Joe Friday-with-a-chip, sounding the first theme of what will be Andersen's Grinch-that-stole-Hollywood message: "This is the city, Los Angeles, California. They make movies here. I live here. Sometimes I think that gives me the right to criticize the way the movies depict my city."

Forget That's Entertainment! This film, which premiered at Toronto in 2003, will be the riveting, mad-as-hell, and, with several hundred film clips making its point, scholarly diatribe of Andersen (1995's Red Hollywood), Los Angeles resident and CalArts academic, enumerating the travesties of the studios with respect to the warts-and-all integrity of his hometown. (And that hometown, by the way, is Los Angeles, not "L.A.," a "slightly derisive diminutive" for which we can thank the movies, an abbreviation that only a city with an inferiority complex would permit.) In three sections and close to three hours, Andersen shows us how L.A. (sorry) – from its architecture to its civic and political history – has been disrespected and manipulated as background, character, and subject over decades of representation in Hollywood movies. His beef has to do with the "muddling" of the relation between reality and representation. Yes, he knows that movies are about stories and not places and that if we notice the locations of the movies, we're not really watching the movie. But, for purposes of his contrarian disquisition, Andersen asks us to watch these movies as he does, not as directed by the movies: "If we can appreciate documentaries for their dramatic qualities, perhaps we can appreciate fiction films for their documentary revelations."

The first look through this new template will reveal how, in the least photogenic but most photographed city in the world, the movies have played fast and loose with the city as background. Obviously in a place dominated by the film industry, the "muddling of fact and reality" will happen big-time. Andersen concedes that, while it's hard to make an argument against it, he still resents Hollywood's geographic license and the fact that so few of the city's landmarks ever play themselves, the Hollywood sign and the Walk of Fame at Grauman's Chinese Theatre being the main exceptions. He grouses that in a town where only a few buildings are more than 100 years old and most of its real history has been effaced, places acquire historic status for having once been movie locations. He's irked by the deception of buildings that appear to be functional – a McDonald's, a road house – but in actuality were only movie sets. And he resents Hollywood's use of his town to play anywhere from Switzerland and China to Chicago (that was Bullock's Wilshire department store in The Public Enemy). He bridles at liberties taken with the city's architectural gems, like the 1893 Bradbury Building and its retrofitting over the years for sets that stray as far from its original real-life purpose as the Hotel Royale in Burma and Philip Marlowe's office to a London military hospital. Ditto for Union Station (so perfect for those movie kidnapping scenes), LAX, Frank Lloyd Wright's Ennis House, and the denigration of the city's modernist, politically progressive architects, like Richard Neutra and John Lautner, whose glass-and-steel hillside homes with the views invariably house the bad guys.

Next Andersen looks at how Los Angeles has been used as a "character" in the movies, something he traces back to Billy Wilder's Double Indemnity (1944) and the adaptations of other novels by Raymond Chandler and James M. Cain, like Mildred Pierce (1945) and The Postman Always Rings Twice (1946). These films, to Andersen's dismay, "convinced the world that Los Angeles was the capital of adultery and murder." For Andersen, it was "outsiders" like Wilder who bear responsibility for making the city "a character" in the movies; they were'nt interested in what made L.A. like a city but rather what made L.A. unlike the cities they knew. Later, the city's image would suffer from the dismissive attitudes of what he calls the "low-tourist" directors, the likes of Woody Allen and his cracks about La La Land and Hitchcock, who preferred the beauty of Northern California's vistas and, in Psycho (1960), actually had Janet Leigh drive from Arizona to San Francisco without having to pass through L.A. Only European directors – the "high tourists" like Antonioni, Jacques Demy, Jacques Deray – seemed truly to appreciate the city, loving the things we hated – Sunset Strip, the parking lots, coffee shops, strip bars, and motels.

Andersen credits Roman Polanski's Chinatown (1974) as the first to turn L.A. into a subject that a film could be about. He blames that film and L.A. Confidential (1997) for the real-life consequences – political cynicism and defeatism – that flow from buying into their fictional representations of a secret city history, where threshold decisions affecting consequential civic issues – water, transportation, public housing, and the inner-workings of the Los Angeles Police Department – were made backroom by powerful, invisible cliques. At great length, Andersen debunks these movie-made myths, detailing how the corrupt handling of these civic issues were, in fact, matters of public record and often ratified by the voters.

Lastly, the film argues that the nonwhite, poor residents of L.A. have been marginalized, essentially whited-out by Hollywood representations of a city where everyone can afford a car and a house in Malibu or the Hollywood Hills. Instead, Andersen champions the "neorealist" school of filmmaking represented by such films as Kent MacKenzie's The Exiles (1961), Edward James Olmos' American Me (1992), Charles Burnett's Killer of Sheep (1977), Haile Gerima's Bush Mama (1979), and Billy Woodberry's Bless Their Little Hearts (1984).

Austin Chronicle: Okay, so I must ask, first off, why, in a two-fisted, first-person essay of a film like this, did you have someone else do the voiceover narration? [Encke King is the narrator.]

Thom Andersen: I thought the guy I chose could do it better. I didn't want to spend months editing and having to listen to my own voice all the time. Encke King is a filmmaker friend of mine in New York.

AC: What was your impetus for making this film?

TA: Seeing L.A. Confidential. When I first saw it, I didn't like it, thought it was a silly movie. This had to do with being struck by the anti-modernism and cynicism of the movies that I point out in the film. I'm struck by a certain ideological consistency running through movies – particularly movies about Los Angeles, but I also think [it's] true generally of Hollywood movies – an ideology of cynicism, which I thought was more important than whether a movie is ostensibly left- or right-wing in its politics or ideology, but, rather, that there's this underlying ideology that has the effect of disarming people, depoliticizing them, disengaging them from any political process. And that was strongly felt in L.A. Confidential.

AC: How would you describe the theses of your film?

TA: Beyond the ideology of cynicism, another theme is that adhering closely to reality is more interesting than making things up. I heard Ken Burns talking about the war recently, and he was quoting someone that, "God is the greatest dramatist." I'm making a plea for documentary, saying in film, let's look at fiction films for their documentary aspects. The documentary part of a film is sometimes the most interesting part. Kind of like looking at films against the grain, as it were, and that can be more interesting than following along in what I call involuntary attention. [There's a psychological theory] that movies do the work of our voluntary attention, they tell us how to orient ourselves to what we're perceiving, and I'm proposing another way of looking at movies. I think that's what people find interesting about the film if they like it.

AC: How many films were sampled in the film?

AC: That must have been a job, getting the rights to all of them.

TA: I didn't get the rights to all of them.

AC: That would be extremely expensive, wouldn't it?

TA: The funny thing about rights is that the studios can be pretty arbitrary, so I didn't always try.

AC: And that wasn't a problem?

TA: It limited the distribution of the film; it hasn't shown in commercial theatres that much.

AC: Is this a problem for you?

TA: I can't say that I made the film with the thought of making money on it. [I] didn't expect to make money. [I] might have made back my costs, which weren't that high – don't know how much the film cost to make. It took four years to make but not working on it full time. I do wish it were available to anyone who wants to see it, and I know that it isn't now. It probably will eventually be out on DVD, and the question of the rights will be resolved.

The AFS Documentary Tour presents Los Angeles Plays Itself on Nov. 14, 7pm, at the Alamo Drafthouse at the Ritz, followed by a Q&A with filmmaker Thom Andersen. Tickets are $4 to AFS members and $6 for the general public.