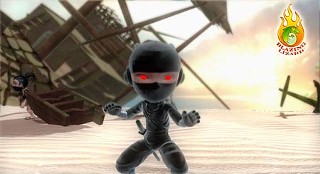 Recent Chronicle cover boy and all-around PR wunderkind Richard Garriott continues his domination of my inbox this month. First was the news that he's going into space in fall of '08, making him the sixth private citizen and the second Garriott to conduct a space mission. Owen Garriott, Richard's father, beat his son to that one. Check out www.richardinspace.com if you insist on knowing more. In other Garriott news, he'll be keynoting the Independent Game Conference.

The Independent Game Conference will be in Austin Nov. 29-30. It's like the Austin Game Developers Conference but smaller (and cooler?). Also keynoting will be the heads of recent "Best of Austin" winner Gamecock Media, Mike Wilson and Harry Miller. Look out for Gamecock's future release, Pirates vs. Ninjas Dodgeball. I know I am.

In the "it sounds an awful lot like the plot to Best of the Best" department: Team USA took home the overall team championship at the World Cyber Games in Seattle, beating out defending champions Korea. Wait a minute, didn't Korea win in Best of the Best? Oh well, America can't win 'em all.