You knew NBC renewed it, but did you know someone was gonna see God? 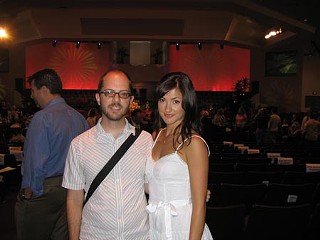 Somebody Touched Me: A friend of the author sidles up to the recently baptized Lyla (Minka Kelly). The episode of Friday Night Lights shot in part at PromiseLand airs Friday, Oct. 5. (Photo by Mike Dolan)

So there we were on Sunday morning, receiving the word at PromiseLand, a church on East 51st. If you ran into us there, Dale, a fellow screenwriter, and I might have said we were at the Pentecostal megachurch doing research. But if you watched us closely, you could see that we both felt a genuine pull toward the passion and emotional precipice. Then the Rev. Jonathan Suber broke the spell.

He started talking about television. He beseeched the congregation to come to the Wednesday night service; it was going to be very special. It was going to be an opportunity for the entire world to witness the PromiseLand ministry, because Friday Night Lights was going to shoot a scene in the auditorium. Apparently, one of the characters was going to leave behind a life of sin. In other scenes, the character was going to be counseled and baptized by the Rev. Kenneth Phillips, the founder of PromiseLand, whom Dale insisted was a dead ringer for the former New York City Mayor Ed Koch, "if he were juicing."

This odd turn of events shuttled me back toward a more familiar stance of cynicism. I'd worked on many films and had witnessed the inevitable and absurd devastation of culture that occurs when filmmakers try to wrestle what they need from authentic events. Dale and I agreed to come back on Wednesday and watch things get weird.

However, that is not how Friday Night Lights rolls, and what we saw on Wednesday night was a symbiosis between Hollywood and the Holy Spirit. Because the production crew simultaneously shoots three cameras, they can be remarkably unobtrusive. They never stopped the service or asked the crowd to get rapturous or staged someone being struck by the Holy Spirit. They simply let the music and the message play, and the stealth camera crew weaved in and out of the crowd getting the coverage they needed.

The worshipper turned out to be Minka Kelly, who plays the romantically conflicted cheerleader Lyla Garrity, and she looked gorgeously redeemed in a white cotton shift.

We witnessed a plot point when another character squeezed in beside her during the service. I gave Dale the dirt: "That's Tim Riggins. She slept with him after her boyfriend was paralyzed in episode one."

Phillips was in fine form, clearly a casting boon. He delivered a steady and heartfelt sermon, reaching out "to that one person who is here tonight, ready to join the light. Ready to leave behind a life of sin."

This might have been a scripted plea that Lyla answers during the episode, but it was so on message for the church that it played seamlessly. The pastor then spoke about his experience on the show and wove it in. "They called and asked if I could baptize a cheerleader," he began, pausing to hit the timing perfectly. "I told them I was born to baptize."

He said he was surprised and overwhelmed by the experience and that he never would have thought Hollywood and his church could come together to serve such a good purpose. "I think the show should be called Friday Night Life," he said. "It's filled with life, with the same things we see here at PromiseLand." He spoke about a young man injured in a motorcycle crash and another man who left his family to live an immoral life. "But we have the light here. You give the life, and we'll provide the light."

He then huddled with an assistant director and said, "It's a wrap." 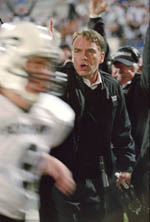