Ethan Hawke on 'The Hottest State'

How does a man find a love story he can relate to when he's been an actor his whole life? He writes one about himself.

"I never really wanted to make it into a movie," says Ethan Hawke of his 1996 book that will double as his directorial debut. "But enough time had gone by that the book didn't feel as personal for me: You have to grab the moment when it comes."

The novel is about an up-and-coming actor in his early 20s struggling with relationships. "I've had some really lousy relationships with women. There was no book that defined how I was feeling," Hawke says. "There are tons of books about women having bad relationships with men and impaling themselves on love but not any about men. I was 18 when Dead Poets Society came out, and I felt like I'd been defined by the movie industry. I worried if I became famous, I'd become a phony bastard and that if I didn't become famous, I'd be a loser."

Whether or not Hawke is defined by the industry, The Hottest State is defined by Hawke. Author, director, and screenwriter, his fingerprints are all over it. The main character, William (an uncanny Mark Webber), resembles a shaggy, unshaven Hawke circa Reality Bites, and his past mirrors his creator's. The film opens with the testimony of how William's parents met in Texas, then divorced when he was still a child, which led to William and his mother moving away from the Lone Star State.

"Texas is representing the father," Hawke explains. "It's [about] longing for a masculine role model. It's like one of those John Lennon love songs that he wrote about himself that was really personal. If you write something really detailed about yourself, then maybe other people will find it special."

What makes The Hottest State special to Hawke is its closeness to Texas. The film is full of secondary character subrelationships, one of those being between William and his birthplace. Every scene in Texas involves William's father and pictures the landscape in a bluish-gray light during the stressful times and a wide-open prairie otherwise. All along, there is an intense emotional connection to the first home of William and Ethan. The Texas presence is also heavy in Ethan's second book, Ash Wednesday.

"It's going back to the place of origin," he says. "Texas has always been that for me. There's a great mythos to Texas that's easy to use. It's bigger than life, and it just grabs you."

Excelling at acting, William grabs on to it like a crutch helping him cope with reality. Throughout the film's course, the line between the actor and the real William blurs surrealistically. This vertigo-ish situation stems from Hawke's view of interpersonal politics.

"I think that happens to everybody. We all play roles for each other; then it gets unclear who we are," he says. "We act differently around different people."

Despite the similarities with his past, Hawke resists the notion that his film is autobiographic.

"It's not a memoir; I'm just having fun using my life to lend authenticity to the things I write about. I took the issues that happened to me and used them as inspiration."

The Hottest State opens in Austin on Friday, Sept. 21. For a review and showtimes, see Film Listings. 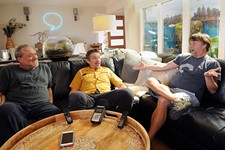