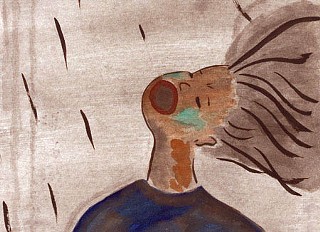 On Aug. 6, 1945, the United States dropped "Little Boy," a 15-kiloton uranium bomb, on the center of Hiroshima, killing 140,000 people. Three days later, "Fat Man," a 2-kiloton plutonium bomb, was detonated over Nagasaki, killing 70,000. When these bombs hit the ground, wind from the explosions reached 1,000 mph, and the ground temperatures 9,000 degrees Fahrenheit; people near the hypocenter instantly were vaporized. Since 1946, an additional 160,000 people have died from the delayed effects of radiation. Hiroshima and Nagasaki are the only times that nuclear weapons have been used during war, but, at the end of Steven Okazaki's film White Light/Black Rain: The Destruction of Hiroshima and Nagasaki, we're informed that somewhere today there are enough nuclear weapons to equal 400,000 Hiroshimas. More than scary.

Hiroshima always has stood for the ultimate horror and shame of war. Sixty years later, the value of human life diminishes by the news cycle. In this depressing context, Academy Award-winning and -nominated Okazaki (The Mushroom Club) brings us back to Hiroshima for a closer look and a cautionary tale. Rather than politicizing or moralizing the event, as other film treatments have, Okazaki went instead with a facts-just-the-facts approach, showing us archival footage shot immediately after the nuclear holocaust and then letting 14 of the 500 survivors he spoke with tell us their horrifying stories and describe their horrifying injuries on camera.

But before we get to them, he takes us to the happening street life in today's Tokyo and Hiroshima, where he stops teens on the street (it's not hard to run in to a young person in Japan: 75% of the country's population was born after 1945) to inquire what historical significance the date Aug. 6, 1945, has for them. They think and think, giggle, shrug, and come up empty. For the ultimate cinematic disconnect, we cut to the survivors' stories: A woman who was 11 at the time was the only one of 620 at her school to survive the bombing, after she and a friend jumped into a nearby river to escape the fire; another describes the experience of searching for her mother in the aftermath, only to find her in the rubble and watch her body turn to ash. Another survivor, 13 at the time, was one of the 25 Hiroshima Maidens, who in 1955 were flown to the U.S. for cosmetic surgery. Keiji Nakazawa, 6 at the time, lost his father and two siblings in the bombing, while his pregnant mother was shocked by the bomb into giving birth to a baby who died four months later. He later told his story in the comic-book series Barefoot Gen. Bizarrely, the more obviously deformed survivors of Hiroshima and Nagasaki were frequently stigmatized in their own country.

Okazaki moves next to the Air Force veterans who flew the missions and dropped the bombs. It's nothing less than amazing to listen to these four retirees describe their participation with razor-sharp recall and a forthrightness that can only be described as remorselessly patriotic. The Enola Gay navigator describes the mission over Hiroshima and admits he never had a nightmare, much less a dream about the event. He does make a point of chastising the ignorance of those who say we should "nuke Iraq," adding that while he believed dropping the bomb was the right thing to do, there's been no time since that he thought it was appropriate. In one of the more enervating scenes in the film, Okazaki shows footage from an old This Is Your Life segment where the pilot of the Enola Gay is introduced on camera to one of the Hiroshima survivors and they embrace awkwardly.

Austin Chronicle: What surprised you the most about the reactions of the survivors of Hiroshima, those Japanese who were born after the bombing, and the American military you interviewed?

Steven Okazaki: With the survivors, I was struck that they couldn't hold the anger and hate in their hearts and found a way to forgive the people who dropped the bomb, but they could not forgive themselves and still felt guilty for not dying, even after 60 years. As far as the Japanese born after the war, I was completely taken aback when none of the young people we interviewed on the streets in Tokyo knew the significance of Aug. 6, 1945. I thought at least half would know. The first eight we filmed didn't know, so we just stopped filming and put all of the interviews in the film. As far as the Americans, I was surprised that they all made such strong statements about the future use of nuclear weapons, since they were all adamant about the necessity of their use on Hiroshima and Nagasaki. I was also surprised that, though they were all very intelligent men, they seemed purposely ignorant of the delayed effects of radiation exposure.

AC: Was it difficult for you, as a Japanese-American, to make this film?

SO: As a Japanese-American, I felt a particular responsibility to tell the story. I felt I was in a position to connect the Japanese and American sides of the story, which are so far apart. With the American audience, I wanted to cut through the fear, anger, and guilt that stops people from even hearing a little of the survivors' stories. With the Japanese audience, the presentation of the survivors as regular people, not victims or heroes, is also new.

AC: If you were to make the film again, is there anything that you would do differently?

SO: This is a really hard question. I thought about the film for 25 years before I made it. I thought about how I wanted to introduce the survivors, as they are, as regular folk, not victims or heroes. I though about respecting the integrity of the material, using it not just for dramatic effect or the necessary cutaway. I thought about how to present such visually and emotionally disturbing material but holding the audience through this difficult journey. So, when HBO asked me to make it, I was ready for it. And when the film was done, I felt extremely satisfied. I felt I had made the best, most challenging and comprehensive film I or anyone else could make.

But Hiroshima and Nagasaki is a deep and disturbing subject. I opened myself up to it as much as I could when I shot and edited the interviews, but I still brought my own fears and prejudices to it. I tried not to, but I know I did it unconsciously all the time. There were times when the horror they were describing was so beyond my experience and comprehension, I would back away from it in the interviews. Now I've grown from the experience and realize I could have gone further and deeper. ... I guess what I'm saying is that I feel great about the film, then I go back to the survivors or the paintings [done by the survivors and shown in the film], and I feel humbled, knowing my limits and the limits of the medium.

Steven Okazaki will be in attendance for a Q&A.