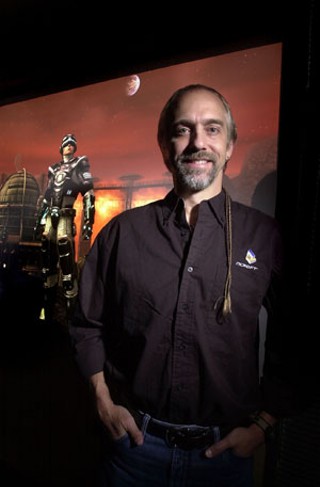 Six years ago, Garriott, of longtime Austin game-development fame, set out to remake the world of massively multiplayer online games (MMOs). Garriott and his team at Origin helped pioneer the genre with Ultima Online in 1997. While there have been imitators, Garriott explains that "we were just stabbing in the dark. It wasn't meant to be the end-all. And some of those standards we created that have become entrenched are just poor game-design principles."

Many of that original team followed Garriott to Destination Games with the goal to move beyond traditional fantasies and the limitations of their early projects. After a major overhaul and acquisition by Korean-based NCsoft, the team at NCsoft Austin will be releasing Tabula Rasa this fall.

Tabula Rasa is a science-fiction MMO, rare in a market dominated by the 9 million elves and orcs running around World of Warcraft. It tells the story of humanity struggling for survival against the ever-expanding Bane while aided by technological remnants of the lost Eloh race. You play a soldier, launched straight from boot camp to the front lines of a new planet, working with a field of potentially millions of other users, all fighting the good fight.

"My passion for online games comes from history," says producer Starr Long, who has been with Tabula Rasa since its inception and works to maintain project schedules, oversee department heads, and make sure the game is finished close to on time and relatively on budget. "The first games ever were dice games. They were social experiences. They were mechanics that gave us structure for social interaction. It was an aberration when they became about solo play. Cooperative play goes back to what makes games strong."

That's a feature Garriott extols. In a climate where video games are blamed for everything from youth violence to obesity, he sees MMOs as a net gain for society.

"Solo-player games throughout the rest of history tend to provoke an anti-social behavior that drives people to hide in their rooms in the dark," Garriott says. "That can be seen as a negative social impact; MMOs are bringing people with like interests together. So all good MMOs are having a good social impact."

That cooperation goes into the very heart of the game's narrative. As lead designer, Paul Sage makes the "day-to-day decisions on whether the game will be fun or not." That includes everything from deciding how high a player can jump to editing the actual fiction, which can be a challenge. Although there's a basic storyline, players have options on how to follow it. Just as the French Revolution served as the background for both the Scarlet Pimpernel and Jean Valjean, Sage wants players to find their own place in the war against the Bane.

"One of our goals is to provide a compelling background story to the game," he says. "Our goal is to find stories that players will tell other players. We use the story to set up events and let the players decide what to do. It's very hard to give players a choice in how they play the game, but what we're concerned with is how the player experiences the story based on what they do."

That variety of choices means that the storyline sometimes rushes past the player. Most users won't spend 30 minutes reading a zoological breakdown of the creatures they're fighting, so it's up to the artists of the game to make the environment tell a story.

"It all has to be visual," says associate art director John Mueller. "It's really in the sort of shape and silhouette and form. If it's evil, it's usually sharp and spiky and hard. If it's good, it's round and soft. The Bane have a scalloped, insectoid sort of approach to architecture and armor. The Eloh are ornate and colorful. It shows that in their culture, there's artistry behind the clothing. It speaks to the idea that if they have that, they probably have art and philosophy and culture. Insects don't have that."

From an audio perspective, audio director Tracy Bush says he drew from a palette of everything from classic sci-fi to Black Sabbath and the Cure to European techno. But when it came down to giving Mueller's creatures a voice, grunt, growl, or roar, he and senior sound designer Andy Brock took it into their own hands – or mouths.

"When we go to a new sci-fi movie, we see what they're doing new with sound effects," he says. "But then there's monsters. Making monsters is always fun. We have a really nice microphone that we make monster noises into. We put whip cream in our mouths or chew on marbles and make all the noise. There's a big window right outside the studio, so it looks very weird."

That's when they weren't busy firing real guns and overlaying them with laser sounds.

"A lot of people can fall back onto a synthesizer," said Bush, "but if you want to make it sound visceral, you've got to go to something real."

Most of the talent behind the game comes from Austin transplants. As Sage says, "It's very difficult to find talent in Austin that's really triple-A talent. You have to recruit from California, but the nice thing is that once they get to Austin, they all want to stay."

That was certainly true for Garriott.

"I think Austin is one of the pre-eminent high tech art cities," he says. "When you look at it from a tech point, there's all these technology companies that were here long before Origin got started. But Austin has always been an art city. And I think a computer game is the quintessential high tech art. I really believe strongly that the fact that we came here to Austin has been pivotal to my personal and business success."