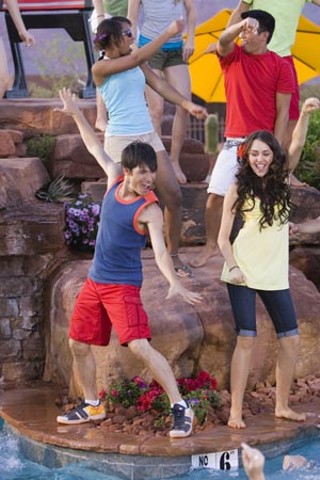 It took three tries before I finally did it. I watched High School Musical and High School Musical 2, the Disney Channel's newest franchise and media juggernaut, back to back. I feel like I ate a box of Krispy Kreme doughnuts in one sitting: buzzed, nauseated, and sheepish.

High School Musical 2 was the most-watched cable program when it premiered earlier this month, and its soundtrack has broken all kinds of sales records. Negotiations are under way to produce HSM around the world. A production of HSM is appearing somewhere across the nation onstage (a local production occurred in Austin this summer), on ice (a touring roadshow), on the Disney Channel, or in high schools throughout the nation. High School Musical 3 will be a major motion picture to be released next year. It's the TV version of Harry Potter in how it has captured its fan (tweens, children, and their parents). All of this baffles as much as it intrigues me.

I could go into an analysis of why this musical makes me gag, but frankly, there are so many things I like about it. I like the fact that it has a diverse cast. The big production numbers are suitably toe-tapping and fun to watch. The solos – which I suspect are the cause of tweeny sighs, particularly when it comes to recent Teen Choice Male Hottie Award-winner Zac Efron – I found intolerable after three bars. I fast-forwarded through them. There's only so much schlock and underdeveloped vocal talent I can endure.

I think the thing that most irritates me about High School Musical and all Disney Channel fare is that they are so gallingly precious. There is no subtlety to the performances, and the characters are simplistic. Yet some of the messages of the two HSMs (be yourself, the importance of teamwork, the value of friendship) would be touching if they weren't embedded in blinding exuberance.

I thank my lucky stars that I don't have some kid begging me to go to a HSM production or to watch it for the umpteenth time on TV. And to all my friends and parents who endured watching me in productions of Godspell and Grease way, way back in the day: I now understand what those awkward smiles were all about. I'm soooo sorry. And thanks.

Today, Thursday, Aug. 30, ME Television is holding an open call for two new veejays. The auditions will be recorded as part of ME TV's new reality series, The Next Veejay, premiering in October. Auditions will take place from noon to 8pm at the Midnight Rodeo, 2201 E. Ben White. The public is invited to watch auditions and provide their candid, on-camera responses. The Next Veejay and other ME Television programs can be seen on cable Channel 15 and digital cable Channel 577. For more information, go to www.metelevision.com/auditions.

Austin-born and -bred Alejandro Rose-Garcia has been cast as the new love interest for Julie Taylor (Aimee Teegarden) on Friday Night Lights. The 20-year-old Austin High grad has filmed five episodes and is on board for more, according to Amparo Garcia. The latter Garcia is the new executive director of the Mexican American Cultural Center and a multitalented performer in her own right. She's also Rose-Garcia's mother and was more than happy to share the news. Rose-Garcia plays a character called "the Swede," a musician who offers an alternative to the other boys in the fictional Dillon, Texas.

Filming Austin's Lives 3: Amateur and professional filmmakers are invited to submit short films featuring the special people, places, events, and landmarks that define Austin. The best submissions will air on News 8 Austin in November and on KLRU-TV throughout the coming year. Entries may be submitted on video or DVD by Oct. 1. Find complete details at www.filmingaustinslives.org.

The Austin Film Festival recently announced that veteran TV scribe Glenn Gordon Caron will receive the Outstanding Television Writer Award at the festival in October. Caron started in advertising, later becoming a staff writer for Taxi, moving on to Moonlighting, Remington Steele, Now and Again, and now Medium. Caron will be honored along with John Milius and Oliver Stone at an awards luncheon on Oct. 13. For more information, see www.austinfilmfestival.com.