Competitor Steve Wiebe on 'The King of Kong' 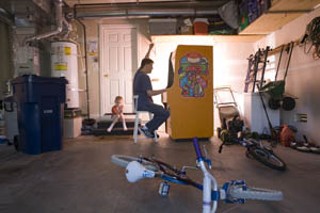 It takes a story of true grit, a man overcoming overwhelming odds à la David and Goliath to be made king. Be it single-handedly slaying an entire army, leading a torn nation to victory, or beating the highest score on a 1982 arcade game that involves an oversized gorilla named "Donkey."

"I'm having fun with it all," he says. "This kind of thing doesn't happen every day."

Wiebe is the principal subject of the Donkey Kong documentary The King of Kong: A Fistful of Quarters. Back in 1982, the recognized Donkey Kong champ was Billy Mitchell, also bequeathed "Player of the Century." His intimidating, six-digit score, along with his ego, has gone unrivaled for two decades.

Enter Wiebe, a middle-aged middle-school science teacher from Roslyn, Wash. Before his teaching career, Wiebe was laid off from a job and left with a lot of free time on his hands. Out of sheer boredom, he researched what the highest score was for the arcade game Donkey Kong and became inspired.

"That was a game I started playing at 12 years old," Wiebe says. "When I looked at the record, I knew I had beaten that score in college. It was a natural move for me to go in that direction."

Director Seth Gordon weaves an intriguing story of good vs. evil, despite what the grand prize may be. The rest of the film documents the epic struggle for the Donkey Kong throne: Wiebe's training with his own Donkey Kong game in his garage, video-game stud Billy Mitchell's profound thoughts on himself, and the growing tension between the two as they topple each other's scores via videotaped games or inside the Funspot arcade.

"I have to play in the garage, so it's away from the family," Wiebe says. "Last summer I was going in there for four hours everyday. When I finally got the high score, my wife was at the end of her rope."

Gordon does a compelling job of building character so much that it blurs the line between documentary and script. Mitchell's Lynyrd Skynyrd hair and Stephen Colbert attire is a stark contrast against Wiebe's soft-spokeness and Mr. Rogers mannerisms. Though the movie ends with a declared king, the battle for the throne continues.

"Billy came out with a score a couple of weeks ago that was about 1,000 points higher than mine," Wiebe says. "It seemed awkward. I couldn't tell if it was videotaped or if he actually played it live."

As the swords clash over who will be the next king, Wiebe claims that he still spends hours in his garage, between a video game and a water heater, sharpening his blade.

"There were times that I was so pressed down that I wanted to give up," Wiebe says. "But I'd wake up another day and feel refreshed and want to keep fighting. You have nothing to lose when you're the underdog. If you don't try, you won't win, but if you just go for it, you'll always have a chance."

King of Kong: A Fistful of Quarters, which screened at South by Southwest Film 07, opens at the Alamo Drafthouse South on Friday, Aug. 17. There will be Donkey Kong tournaments in the lobby before the Friday-Sunday evening shows, and Steve Wiebe will attend the Sunday evening shows. For a review and showtimes, see Film Listings.