First there was Holly Hunter coming to the small screen as a tortured woman sought by an angel to save her sorry soul in Saving Grace (TNT). Then there was Glenn Close, whose bloodcurdling turn as Patty Hewes in the new FX series Damages is as ruthless and scary as they come. Now there's David Duchovny in the new Showtime series Californication. Three extraordinarily flawed characters you just can't take your eyes off of. All on TV, all in new summer series, and all on cable.

Close's Hewes is the truly evil of this trio, while Hunter's Grace is at least struggling with what's right and wrong. As for Duchovny's Hank Moody -- well, this is where it gets interesting. There is something about an actor who can play a type-A ass, still appear vulnerable, and, more astonishingly, likable. (You might want to throw in James Woods as Sebastian Stark in Shark, but honestly, Sebastian Stark as "likable"? Intriguing, annoying, brilliant, and devilish, maybe. Likable, not so much.)

Hank Moody is a New York writer transplanted to California when his successful novel is turned into a film. This would appear to be a dream come true, except Moody's book, God Hates Us All, is transformed into a film titled A Crazy Thing Called Love, a lame movie that bears little resemblance to his original work. The film is a disappointment to Moody. So, naturally, it's a huge box-office success. This allows him a comfortable lifestyle and all the women he could possibly want. The problem is he only really wants one woman, Karen (Natascha McElhone), his ex-wife and the mother of their 12-year-old daughter, Becca (Madeleine Martin). Karen says she's through with Moody -- she's gotten herself engaged to another man just to prove it. But Moody finds it difficult to take no for an answer. In the meantime, he sleeps around, eats poorly, and when his agent, Charlie (Evan Handler), goes to the trouble of setting him up with a nice woman, he sets about cruelly dismantling her sunny disposition, made worse by its striking accuracy. On top of all this, he can't write. He's starting the slow slide into oblivion, another low blow coming with an offer from his agent to write a blog for an L.A. glossy. Literary snob that he is, he sneers at the suggestion, but when he sits down late at night to try and tap out a few thoughts, the only word that comes to him is that one, all-purpose expletive ending in a hard "k."

Like Duchovny's Fox Mulder, there is a sly wit present in Hank Moody, but that's where the comparison ends. Though Moody knows he's burning out, he is at a loss as to how to stop himself. A helping hand might come from his daughter, who appears to be the only person who gets him. But who knows? Only one episode of the series has been revealed, but it appears well worth following. That's saying a lot, given the wealth of new programs out there. 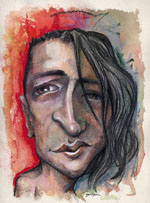 Me and My Friends
John Frusciante's parallel universe