The last time I saw George Ratliff was over dinner and a few margaritas. That was a couple of months ago, when Ratliff came to Austin to show his new movie, Joshua, to John Pierson's film producing class at the University of Texas. Having seen the film when it premiered at Sundance in January and knowing George since his Plutonium Circus debuted at the first South by Southwest Film Festival (and won the documentary prize) in 1995, I reneged on the invitation to the class screening and Q&A but met up with Ratliff and some other Austin filmmakers for a late dinner afterward.

Now it's late June, about a week before Joshua (which was picked up for theatrical distribution at Sundance by Fox Searchlight) bows in New York and Los Angeles and from there gradually rolls out to other cities throughout July. It's early morning, and the time for our scheduled phone interview has come due, but my phone-recording gadgetry is misbehaving. When the phone rings, I initially burst into a soliloquy about my technological difficulties (which disappeared as mysteriously as they arose). "I know," says Ratliff. "I'm such a lesser man without my three cups of coffee." Laughing, we put the conversation on pause and both go refill our coffee cups before launching in.

This lanky, self-deprecating Texan grew up in Amarillo and studied filmmaking at UT. His first film, Plutonium Circus – an idiosyncratic study of the Pantex nuclear plant outside of the director's hometown and the residents who work there and grew up under its shadow – received a warm national response. This was followed by a cooler reception for Ratliff's Austin-made whodunit, Purgatory County. After a move to New York City, Ratliff mounted another documentary, Hell House. The subject matter brought him back to Texas to film the evangelical house of horrors staged every Halloween by a church group in the Dallas suburbs. Now, it's back to narrative features with Joshua, one of the best creepy-kid movies to come down the pike in a while.

The film's subject matter is especially interesting given the fact that Ratliff has become the father of two since leaving Austin. In Joshua, the titular kid is no demon or bad seed. "You don't have to like me, your weird kid," the 9-year-old Joshua tells his father. Ratliff's film taps into some deeply rooted, and often unacknowledged, parental fears. What if a parent winds up truly disliking his or her child? Is there a point at which postpartum depression stops being a biological reaction and becomes an emotional response instead? Are some children genuinely unlovable? With that in mind, the movie is probably not advisable viewing for expectant parents.

Austin Chronicle: So, Dad, where'd the idea come from?

George Ratliff: Well, I'd love to take credit for it, but it was all David Gilbert's idea. Gilbert and I have collaborated on a couple of screenplays. I recommend doing what I do: finding a collaborating partner who is much smarter than you and a far superior writer than you are. I've had a lot of success in that. Joshua was totally his idea, and I absolutely didn't want to do it. I had just started having kids, and I didn't want to wade into the pool of the evil-kid genre. Also, I was sure there were so many traps of it becoming cliché and having been done before that I was wary. I would always present problems that we would talk about, and then we would find really great solutions that I thought were very interesting. So the more we hashed it out, the better it got. It's because I was so negative to the idea that I think we found something really interesting. I think his original idea had quite a supernatural bent to it, and that really didn't interest me at all. What interests me is something that is more steeped in reality, which I think is much scarier.

GR: The Exorcist totally screwed me up as a kid. Watching a lot of the horror movies and frightening movies now, I just don't buy it. I've got to say the bigger influence on this were these French thrillers like With a Friend Like Harry, Caché, Read My Lips, and The Beat My Heart Skipped. I find these very, very unnerving, because there's such a natural quality to them. I can visualize myself being in those positions, so it does more for me. 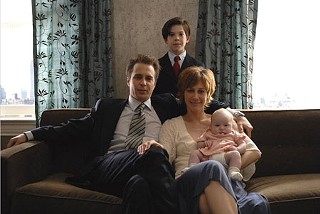 AC: The scale of this movie is so much bigger and more ambitious than anything you've done so far.

GR: Yeah, but it wasn't that big of a movie, I have to say. It was overly ambitious, though. We had to shoot it in 25 days. The only way to do it was storyboarding every shot. I had a very specific idea of what I wanted. Because we cast all New York actors, we had a really good, long rehearsal period, and we found a lot of great things. We could even rehearse in the places we were going to shoot, so I could absolutely figure out the visual style of the movie well in advance.

AC: You really scored with the actors – everyone from Sam Rockwell and Vera Farmiga in the leads as the parents to the brilliant supporting work by Dallas Roberts, Celia Weston, and Michael McKean.

GR: People don't realize, but Michael McKean is one of the smartest guys you'll ever meet. He's a really brilliant guy. But he also has gravitas. He just plays such great dopes that he never gets to do anything else.

It sounds crazy, but I pictured Sam Rockwell from the beginning – even when we were writing the screenplay. So we really just went after him. What got Sam to sign up was when I said that I really wanted Vera Farmiga for Abby. He goes, "You get Vera, and I'm in." Then I did the same thing to Vera. She liked the script and liked me but was also on the fence, but when she found out Sam was in, she said, "If he does it, I'll do it." They both came on at the same time. They so respected each other that it brought a higher level of work. And that raised the bar for everyone on the set. And I just quietly reaped the rewards. I was so lucky.

I love Dallas in this movie. I loved him in A Home at the End of the World. I thought he stole Walk the Line. And Celia Weston. It was a dream cast. I shouldn't say this, but it was kind of gutsy of my financiers to go with all of them. Though they're all totally, absolutely respected, it's not like they bring in a bunch of foreign sales.

AC: Tell me more about the kid, Jacob Kogan. He's such a linchpin. If he weren't good, he would sink the whole movie.

GR: We needed a kid who was not only a great little actor but was also a piano prodigy and, believably, a genius. That was a pretty tall order. I did have one card up my sleeve, which was that I knew the guy that created the show Wonder Showzen, a late-night MTV2 show and really twisted take on Sesame Street. I knew that those guys had worked with all the kid actors in the five boroughs of New York. And I knew that any parent who would let their kid be on Wonder Showzen would let them be in Joshua. He sent me a list with Jacob Kogan's name at the top. We ended up auditioning around 70 kids. I was really surprised at how many of them were very talented, believable actors. But none of them was believably that smart, which for me was the most important thing about Jacob. And the reason he appears that smart is because he is that smart. One of the premises of the movie is that it's really disconcerting to be around a kid who's smarter than you are. That was the whole process of the shoot, too. It was disconcerting to be around Jacob, because he's a frighteningly brilliant kid, although he's a totally nice guy.

AC: You seem to have a special affinity for genre films.

GR: I think there's a lot of room in genre to something that's still very articulate. I have no problem with genre. But Joshua is kind of a hard one to pinpoint. If I had my druthers, no one would know what this movie was when they are walking into it. The great trick that we were trying to do is that it feels like a family drama. And then it just keeps going, going, and before you know it, you're in the middle of this thriller.

Joshua opens in Austin on Friday, July 13, at the Arbor @ Great Hills and the Cinemark Barton Creek. See Film Listings for review and showtimes.

Austin Films Bite Into Sundance
The Unforeseen, Teeth, and Joshua I Found My Fill on BlackBerry Hill
At Sundance, a renewed 'Focus on Film' amid celebrity worship and the frantic search for the next big thing